Home PUO NEWS We will continue to serve, put smiles on faces of Edo people... 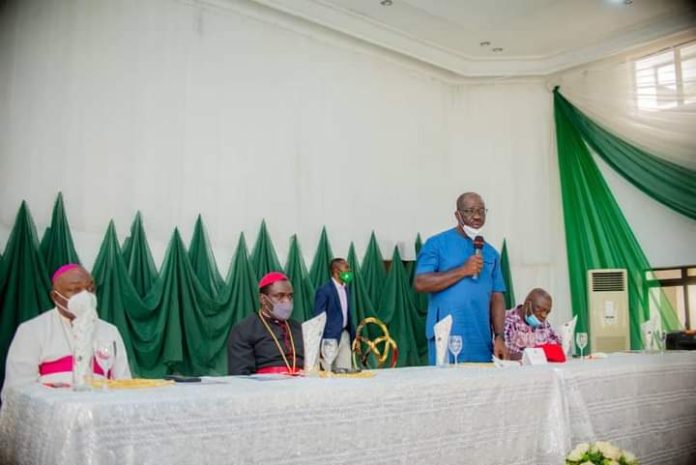 The Edo State Governor and candidate of the Peoples Democratic Party (PDP), Mr. Godwin Obaseki, on Saturday, reassured that his government would continue to serve the people of the state and pursue more programmes and projects to put smiles on their faces.

Obaseki gave the assurance while speaking to Christian faithful in Benin City, during a one-day prayer and fasting programme for peaceful election in the state, organised by the Light of Peace for Africa Foundation with support from the Christian Association of Nigeria (CAN), Edo State Chapter.

The governor said: “God made me governor to do things differently for the benefit of the people. I am in government to wipe away the tears from the eyes of Edo people.

“God heard the cries of pensioners, victims of human trafficking and market women, among others who were harassed daily and sent me to wipe away their tears.”

Reassuring that his administration will do more for the people when reelected, the governor noted: “In every ward we went during our ward-to-ward campaign, the people wanted improved electricity supply and roads. We have constructed several roads in the state and will build more roads in the second term.”

Obaseki said his administration has been able to fix the educational sector and ensured the pupils in the state get quality education.

“Our educational system was bad, with no curriculum and we introduced the Edo Basic Education Sector Transformation (EdoBEST) programme to improve the system. Using Information and Communication Technology (ICT), we trained our teachers instead of making them pass through competency tests. Our students can now read and write well.”

On his part, Bishop Mon Igbinosa charged Christian faithful in the state to come out en masse on Saturday, September 19, 2020 to vote the candidate of their choice without fear of intimidation or harassment.

The First Lady of the state, Mrs Betsy Obaseki noted: “We see the hand of God working in Edo; it is not a coincidence that Edo State is the heart of the nation as Edo has a special place in Nigeria’s development and greatness. What has been happening in the last two years is a fight between light and darkness, good and evil.”