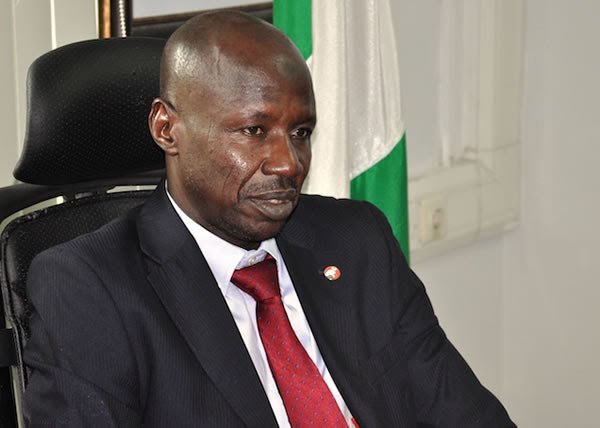 There have been reports of some drama at the venue of the presidential panel, probing the activities of the Economic and Financial Crimes Commission, EFCC, under the watch of its suspended acting chairman, Ibrahim Magu.

The chairman of the presidential panel, Justice Ayo Salami reportedly ordered security operatives to walk out two lawyers on Magu’s legal team shortly after they were introduced.

Channels Television gathered that trouble began after Mr. Magu’s lead counsel, Wahab Shittu introduced other members of the legal team but Justice Salami interrupted him, insisting that only Mr. Shittu would be allowed to defend the suspended EFCC acting chairman.

The Salami-led panel is investigating a series of allegations brought against Mr. Magu and the EFCC under his watch.

Last week, Magu asked the Justice Ayo Salami-led investigative presidential panel, to recall the witnesses who testified against him in his absence at the ongoing corruption probe.

In a letter dated September 4 and addressed to the Chairman of the Judicial Commission of Inquiry, through his counsel, Wahab Shittu, Mr Magu said that the request to recall several witnesses was in the interest of fair hearing.

According to the letter, the suspended EFCC boss is the subject matter in the investigation which was approved by President Muhammadu Buhari in July.

His lawyers also urged the panel to investigate, verify and review the recommendations of the Presidential Committee on the audit of recovered assets, as it relates to the EFCC and the role the suspended anti-graft agency’s boss allegedly played in the mismanagement of the recovered assets.

They also asked the panel to investigate the abuse of office and non-compliance with official directives alleged committed by Mr. Magu.

The lawyers stated that based on the concerns raised, Mr. Magu was entitled to participate in the entire proceedings and an opportunity to cross-examine all the witnesses.