Home PUO SPORTS Lampard: James wonderstrike had me off my seat! 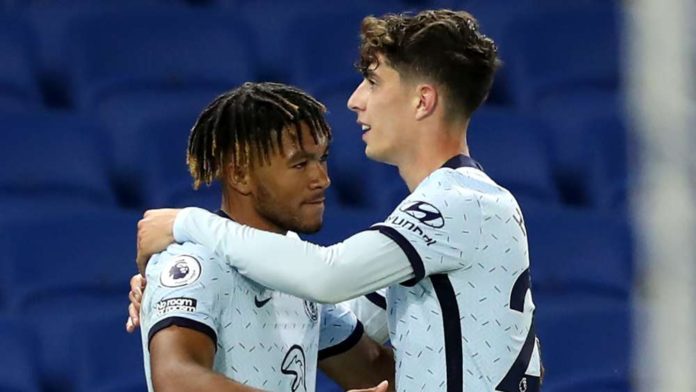 The defender scored a stunning goal on Monday as he made his case following a busy summer.

Jorginho scored Chelsea’s first goal of the match from the penalty spot, while a thunderous James strike and a Kurt Zouma finish tied up a 3-1 victory over Brighton.

James’ goal was a stunning outside-of-the-box missile, one which left Brighton goalkeeper Mat Ryan helpless as Chelsea retook the lead just moments after conceding at the other end.

The 20-year-old defender made 37 appearances in all competitions last season, sealing his true first-team breakthrough, and Lampard was left astounded by his goal in Monday’s opener.

“Reece James’ goal, it had me off my seat and we needed it, we weren’t at our best in that period,” Lampard said. “Reece has got that in him, he is a player of such quality. You try and get him in areas where he can be a threat.”

Timo Werner and Kai Havertz joined James in Chelsea’s starting XI as Lampard’s side cruised to victory to start their Premier League campaign.

Werner made a strong impression in his Blues debut, earning the penalty for Jorginho’s goal, while Havertz played for 80 minutes before making way for Callum Hudson-Odoi.

And James says that the new signings will only lift Chelsea, who got off to a perfect start in the Premier League.

“We knew it was going to be tough coming here and we knew we would have to put in everything to get the three points and I think we did that. We had to push up a gear,” he told Sky Sports.

“As the games go on we are only to get stronger. There are new players in the team so we have to gel and get stronger week by week.

“When you bring in high-level players it brings the competition up and makes everyone work harder to get into the team.”

Chelsea were playing without a number of key figures, including fellow newcomers Hakim Ziyech, Thiago Silva and Ben Chilwell, who did not make the squad.

Christian Pulisic was also absent as a short-handed Chelsea still found a way to seal a fairly straightforward victory.

Those players will soon be back in the fold, though, with James saying that their introductions will only force the rest of the squad to reach a new level after already sealing a top-four place last season in Lampard’s first campaign in charge.

“They are great players and big names so good additions to the team. They will help us move forward,” James told BBC Radio.

“It’s going to put pressure on everyone and make everybody lift their game. There’s more competition in the team and better players so that will help us a lot.

“The aim in football is always to win. Luckily we got off to a good start so hopefully we can keep on improving.”

Following Monday’s win, Chelsea will now look ahead to their second Premier League match: a clash with defending champions Liverpool.