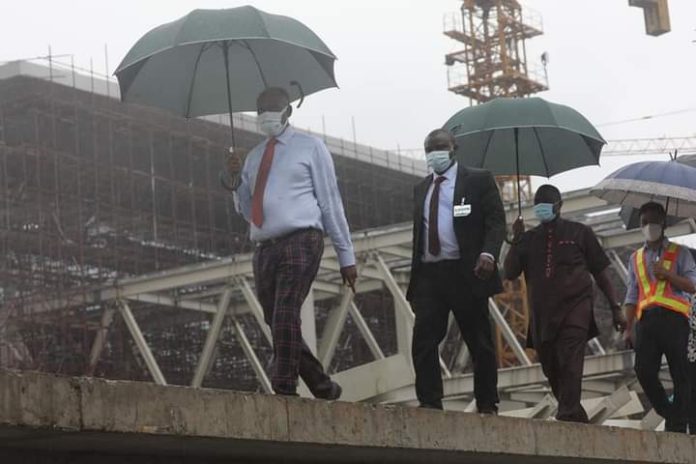 Minister of Transportation, Rotimi Amaechi during an inspection of the Lagos-Ibadan rail project on Wednesday, September 16, 2020.

The Minister of Transportation, Rotimi Amaechi is currently on a monthly inspection tour of the 156km Lagos-Ibadan standard gauge rail project.

The train departed the Iddo station before midday with the minister and top management staff of the Nigerian Railway Corporation (NRC) stopping at various stations along the project line to get updates from the contractors on the quality and progress report of the construction work.

The rail tracks for the 156km rail project have been completed but the stations are still under construction.

Trading along the rail tracks still seem to be a challenge as observed at Agege and Oshodi stations where traders are seen in clusters close to the rail line.

Traders at the Lagos-Ibadan rail line on Wednesday, September 16, 2020.

The Lagos-Ibadan railway, one of the major projects embarked on by the Federal Government, is being handled by the China Civil Engineering Construction Corporation (CCECC).

Clear our arrears within 14 days or…, Ekiti workers threaten Fayose