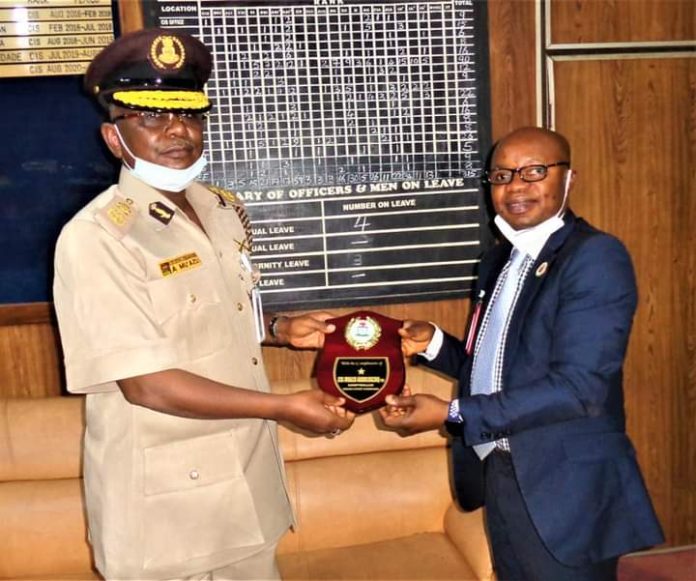 The Enugu State Comptroller of Nigerian Immigration Service (NIS), Muazu Abdulrazaq, has commended the Economic and Financial Crimes Commission, (EFCC), saying its establishment has helped in the sustenance and stabilisation of the nation’s economy

He disclosed this on Tuesday, September 15, 2020 when he received the Enugu zonal head of the Commission, Oshodi Johnson, who paid him a Courtesy Visit in his office.

“We cannot readily explain or imagine what would have happened to our country, had we not had EFCC. We should indeed be thankful for the creation of the Commission,” he said.

Abdulrasaq noted that there was no better time to strengthen the existing relationship between the EFCC and NIS than now, stressing that the country is going through corruption-induced economic trauma.

In his response, Johnson noted the critical roles of the Nigerian Immigration Service in the fight against corruption. “We cannot talk of combating money laundering and other forms of capital flight in Nigeria today without mentioning the efforts of the Nigeria Immigration service.

“International passport of any foreign national, is critical in ascertaining not only the person’s identity, but also his criminal status and because of this, there is a need for all security and anti-corruption agencies to work as a team with each playing its assigned role,” he said.

Also, the Enugu deputy zonal head of the EFCC, Aliu Naibi, commended the NIS for its assistance to the EFCC in document verifications and noted that there was a need to put in place, a technology that would verify those who truly lost their passports and those who are on the run from law enforcement agencies, such as the EFCC.

Abdulrazaq disclosed that the NIS already has the technology, and that anyone who has been reported by law enforcement agencies as having committed any crime, is usually flagged while seeking for a new passport, adding that the request of the Commission for the NIS to first cross-check with the EFCC before re-issuance of any lost passport would be transmitted to NIS’ head office for attention.