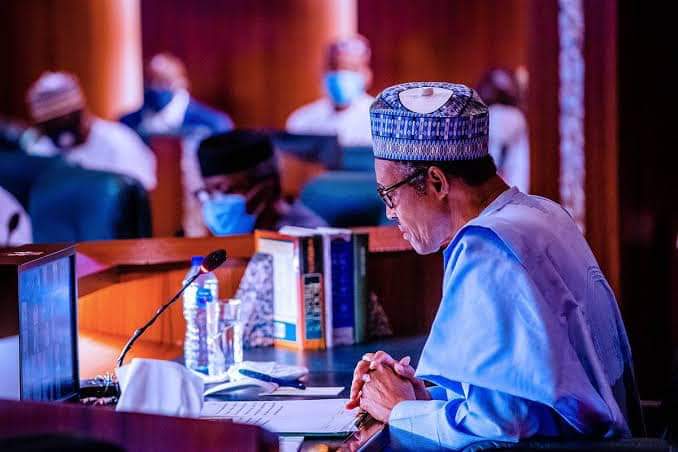 The administration of President Muhammadu Buhari and it’s officials received knocks from Nigerians this week.

They were repeatedly criticized as citizens again questioned their competence.

On Monday, five days to the election, the All Progressives Congress (APC) led government was accused of having a political motive in Edo State after the announcement of an empowerment scheme.

The empowerment was organized by the National Directorate of Employment (NDE) under the supervision of Minister of State for Labour and Employment, Festus Keyamo, a former activist. 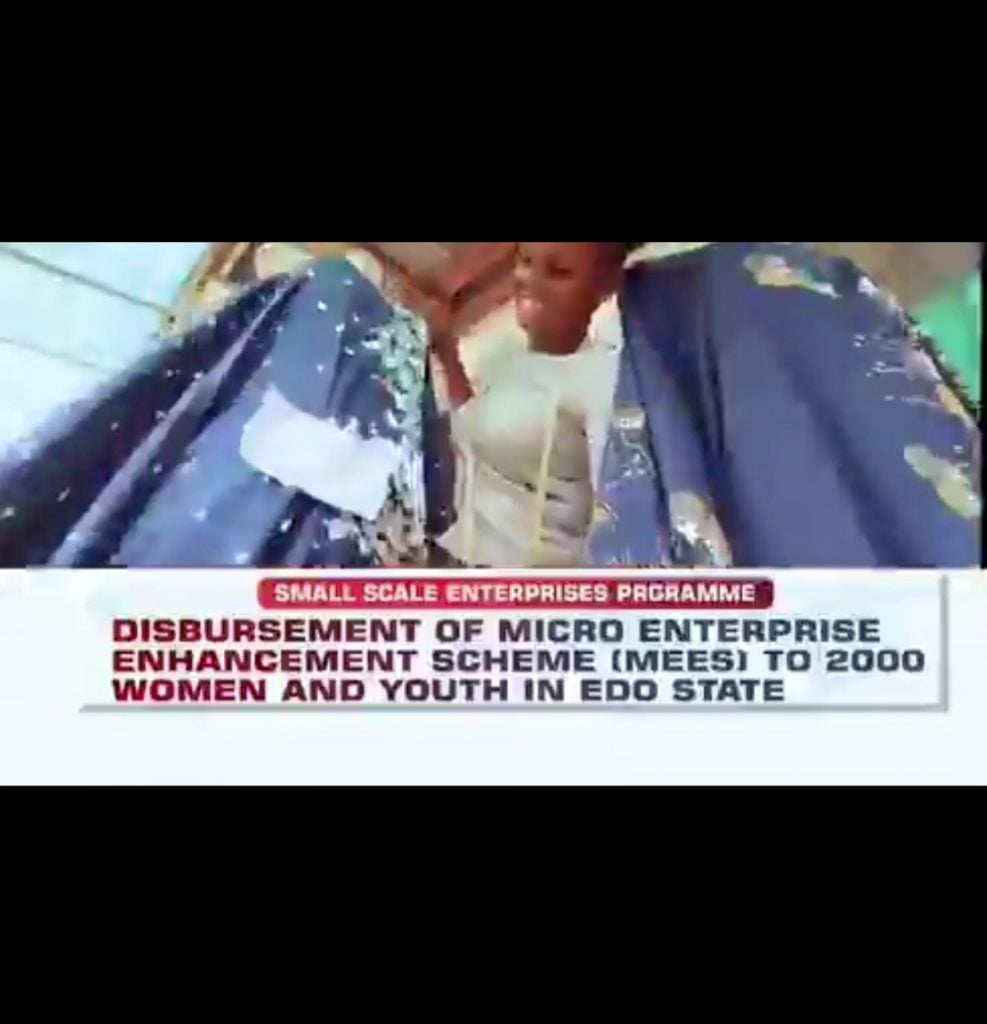 The distribution, at different locations from September 15 to 17, had in attendance wife of APC governorship candidate, Idia Ize-Iyamu.

The election will be held on September 19.

With this in mind, social media pounced on the government. They condemned the timing and argued that the events should have been postponed.

The Conference of Nigerian Political Parties (CNPP) described it as a ploy to induce the electorate.

“How would the wife of a candidate in an election be partnering with the federal government a few days before the election to “empower” Edo people? How do you defend it? That is a clear vote buying by proxy,” the body asserted.

Hamma Hayatu, a former staunch supporter of the President declared: “They have no shame at all”.

“They are doing Tradermoni in disguise in Edo under NDE under the supervision of Keyamo. Vote-buying nonsense. Hope Edo people will shame them”, he tweeted.

TraderMoni is government’s programme for traders and artisans.

Weeks ahead of the 2019 general elections, vocal critics, including former President, Olusegun Obasanjo, accused the Buhari administration of luring voters.

In his statement titled ‘Points for concern and action’, Obasanjo lampooned Vice President Yemi Osinbajo for going to various markets to share money.

“What an act by a Senior Advocate of Nigeria lawyer, number two man in the Executive hierarchy, a pastor of one of the Christian movements…Osinbajo has shown the human weakness and proved the saying that the corruption of the best is the worst form of corruption. His explanation that it was their government programme can only be construed to be very shallow and lopsided, if not an outrightly idiotic programme.

“Those who criticise the action are called evil, but they are not evil as they know what they are doing and saying, and they love Nigeria and Nigerians not less than the likes of Osinbajo. What is the connection between taking the number of PVC (Permanent Voter’s Card) of the recipient of the N10,000 doled out to ‘traders’ and the forthcoming election? There is something sinister about it, and Professor Osinbajo, of all people, should know that.”

On Thursday, Nigerians chided of Humanitarian Affairs Minister, Sadiya Umar Farouq, for inspecting flooded areas around the Kainji Hydroelectric Plant in Niger State via the window of an aeroplane.

With photos, the Twitter handle of her ministry said Farouq “flew over Kainji Fam for an aerial view and assessment of the impact of the flooded banks.” 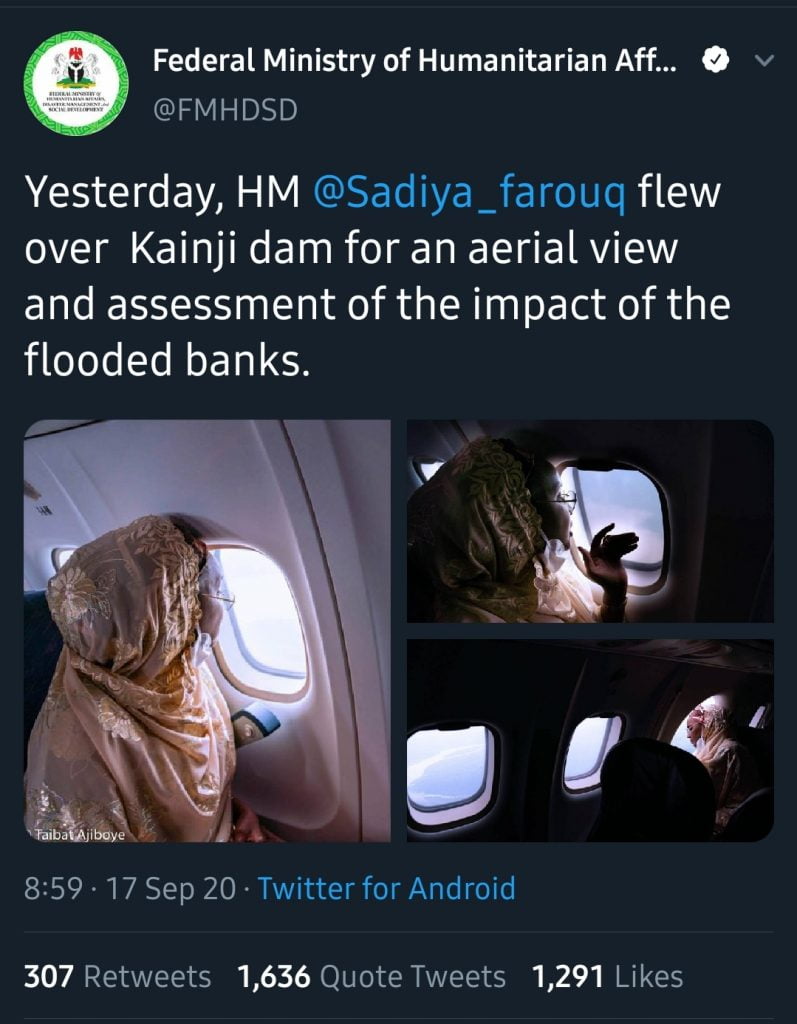 It turned out to be a tweet that should never have been posted. First, the view of the audience showed clouds and second, choppers and drones are used for such missions.

Respondents pointed these out as they mocked senior office holders for wasting scarce resources on simple tasks despite borrowings. 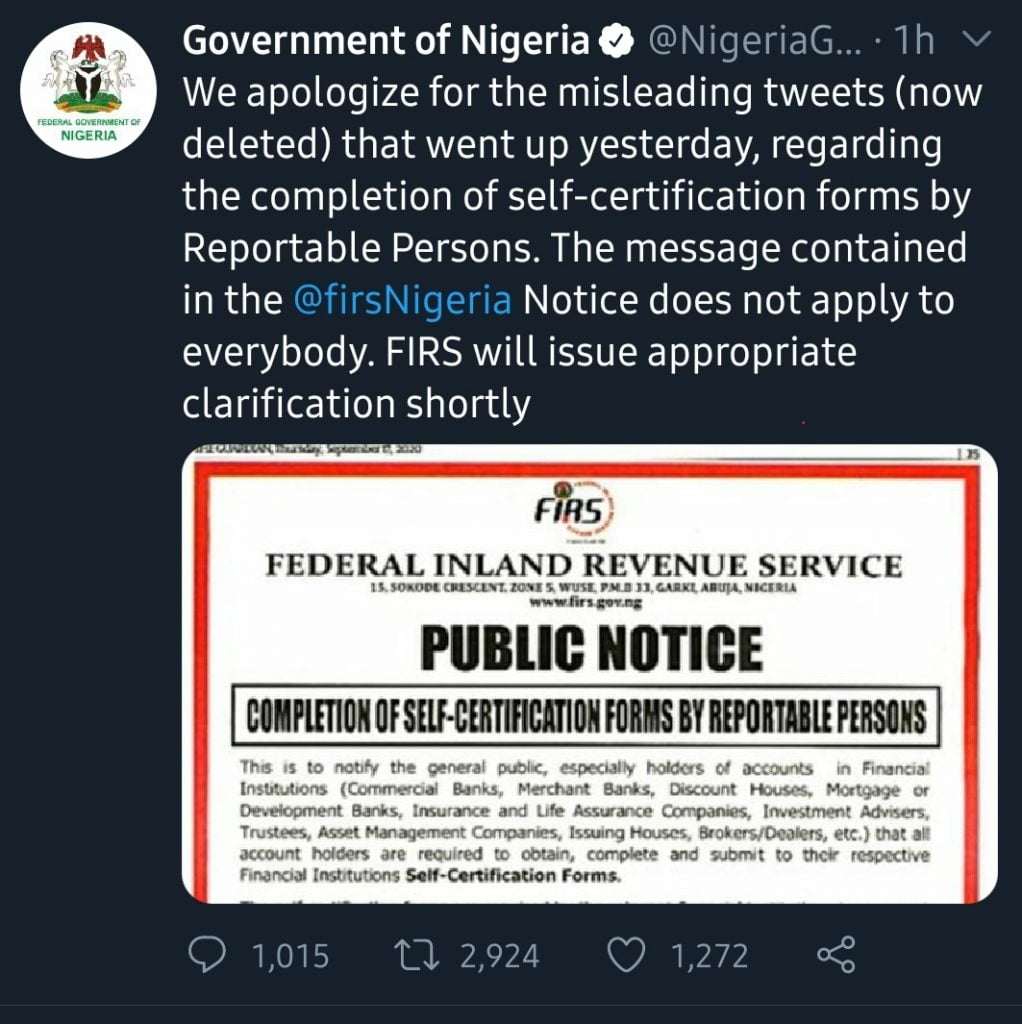 The administration explained that this would enable institutions to do due diligence procedures in line with the Income Tax Regulations 2019.

Citizens were warned that they risked monetary penalty or inability to operate their account if they failed to comply.

The notification was rejected. Nigerians told authorities to use details on existing forms of IDs like the Bank Verification Number (BVN) and National Identity Number.

On Friday, the government made a u-turn, accompanied by an apology.

“We apologize for the misleading tweets (now deleted) that went up yesterday, regarding the completion of self-certification forms by Reportable Persons”, the tweet read.

It clarified that the notice by the Federal Inland Revenue Service (FIRS) “does not apply to everybody.”