Home PUO NEWS Edo Election: This Victory Is Historic, It is A Lesson for Leaders... 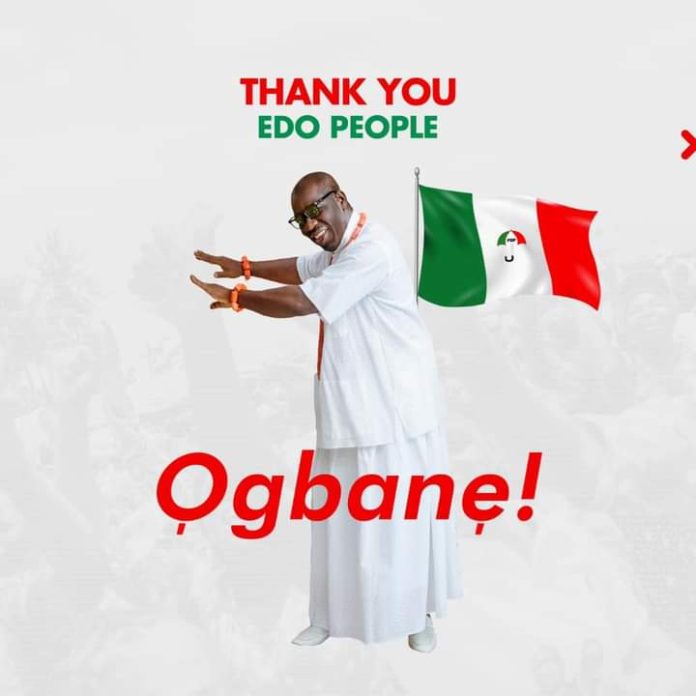 The PDP congratulates the people of Edo state on the re-election of their choice leader, Governor Godwin Obaseki, on the platform of our party.

This victory, as won by the people, is historic and serves as a strong, viable and unambiguous lesson to leaders.

Our party celebrates the resilience and courage exhibited by the people of Edo state in resisting the antics of the enemies of democracy, who, as vote buyers, patrons of lions and tigers, as well as beguilers, attempted to take over the political space of Edo state.

We rejoice with the Edo people for helping to reset the political culture of our nation by casting their votes, protecting the votes, ensuring that their votes counted and following it, “bumper-to-bumper”, to the final point of declaration.

On account of the reverberation of this victory across the length and breath of our country, the PDP implores President Muhammadu Buhari to continue in this new found spirit of ensuring that the people are allowed to freely choose their leaders at all elections.

Our party states this in our belief that in spite of his administration’s failure in other spheres of life as well as in previous elections, if Mr. President can continue to toe this new line of allowing for electoral uprightness, history will be beckoned to be kind to him.

To the “political godfathers”, this election must serve as a loud lesson that power belongs only to God, which He confers through the people; and that no matter how an individual strives to lord it over others, the will of God, through the people, will always prevail.

Our party also notes the efforts of the Independent National Electoral Commission (INEC) under Prof. Yakubu Mahmood in ensuring that Edo election was conducted in a manner that was largely adjudged to be free, fair, transparent and credible. Nigerians hope that what we have witnessed in Edo state will not be an off-season procedure in the commission. We demand that this credible process applies to all our elections.

The PDP applauds the use of virtual portal by INEC to upload results directly from the polling unit, the base of our election, which made it impossible for electoral violators to hijack this electoral process.

It is our hope in the PDP that this new found image of INEC will gather more thresholds in future elections, particularly the October 10, 2020 Ondo governorship election.

We however call on INEC to strengthen its processes, particularly in the area of card readers, to forestall the type of delays witnessed in accreditation of voters.

Our party also notes the improvement in the activities of our security agencies compared to past elections. We hope that our security organs will continue in this stead in future elections.

The Edo election has indeed shown that credible elections are possible in our country if we play by the rules.

Furthermore, the PDP applauds the international community for their keen observation of our electoral processes as well as profiling of those who are bent on undermining our democracy and making free and fair elections appear impossible in Nigeria.

We urge the international community and all lovers of democracy not to relent in providing necessary advisory to our leaders on the conduct of our elections.

The PDP restates our support for the actions taken so far by the US and UK in restricting electoral violators from visiting their countries and we urge them not to restrain on further sanctions against such individuals for their sinister roles in our elections.

The PDP appreciates the candidate of the APC, Pastor Osagie Ize-Iyamu whose participation in this election helped to deepen our democracy and enabled the people to make their choice. We invite him, in the spirit of sportsmanship, to congratulate his brother, Governor Godwin Obaseki and join him in the onerous task of leadership in the general interest of all Edo people.

Furthermore, our party thanks the media, the civil society groups and all Nigerians across board, for showing more than a passing interest in ensuring that the wish of the people of Edo State for a credible and transparent election prevailed. We do not take your efforts in this regard for granted.

The PDP assures of a continuous partnership with all critical stakeholders in our collective desire to recreate a nation that will continue to be our pride.

Thank you all as I proudly announce to you that #OndoIsNext.