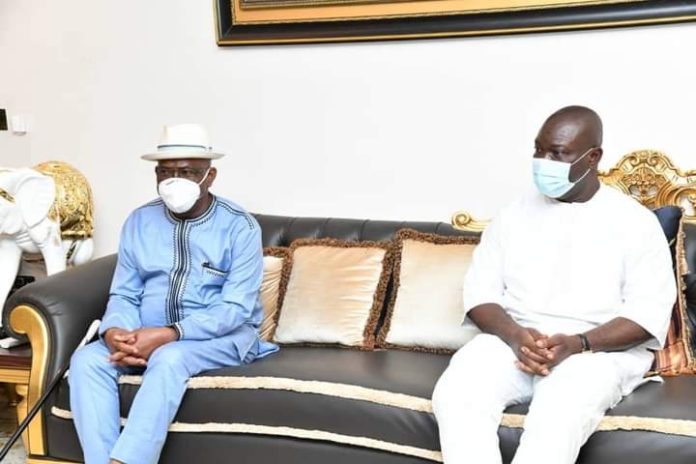 Governor Wike who led a delegation of Rivers State elders on a condolence visit to Enugu on Monday, described the death of Mathias Ekweremadu, who until his death was Enugu State Commissioner of Transport, as painful.

The Rivers state chief executive who was accompanied by his Enugu State counterpart to the residence of Senator Ekeremadu, said the news of the abrupt death of Mathias Ekeremadu was devastating.

“on behalf of the Government and people of Rivers State, we have come to condole with the Governor ( Lawrence Ifeanyi Ugwuanyi) and your humble self over the death of your younger brother who incidentally was the Commissioner of Transport in the administration of our brother ,the Governor of Enugu State.”

Governor Wike said the Rivers State delegation was in Enugu to empathise with the Ekeremadu family as well as the Government and people of the state in their moment of grief.

As Christians, he urged Governor Ugwuanyi and Senator Ekeremadu to take solace in the fact that it is God who have the sovereign power to give and take life.

Senator Ekweremadu, thanked the Rivers State governor for his show of love and affection to his family, the people and government of Enugu State.

“We want to thank you because this is vintage you. you’re a man who supports and shows solidarity to your friends and allies at every critical moment. I wanna thank you for your concern for humanity.”

He explained that though his younger brother died in active service , he was such a lucky man, having served as a Local Government Chairman, State lawmaker and Commissioner in the State.

He commended Governor Wike for his show of friendship and prayed that his show of love will not be in vain.

On his part, Governor Ugwuanyi thanked the Rivers State governor for the visit and urged Senator Ekeremadu to take heart over the death of his brother.

Governor Wike was later taken to the residence of the late former Commissioner of Transport where he also commiserated with the wife, Mrs Stella Ekeremadu and her children.