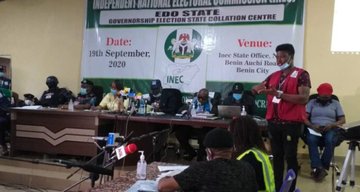 The Peoples Democratic Party (PDP) has raised an alarm over the whereabouts of the Independent National Electoral Commission (INEC) Collation Officer for Orhionmwon Local Government Area.

Omoregie Ogbeide-Ihama, a PDP agent, raised the alarm on Sunday at the Collation Centre for the Edo Governorship election in Benin City.

Ogbeide-Ihama explained that the Collation Officer for the Local Government and the Electoral Officer were with them at the Collation Centre but failed to return to the venue after a one hour break announced by the Returning Officer.

Expressing fears over the whereabouts of the duo, the PDP agent said his party has a copy of the result for the local government in question.

According to him, he was later informed that the Collation Officer and the Electoral Officer were somewhere around the Centre but have not turned up at the Collation office at the time of this report.

We Must Team Up To Fight Instability In The Sub-region And...