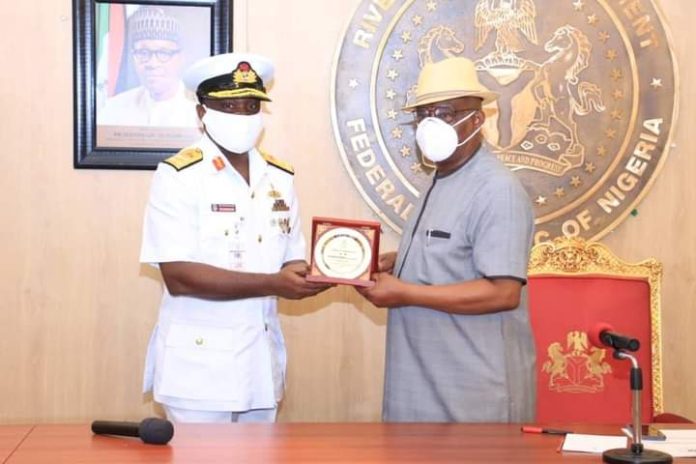 Rivers State Governor, Nyesom Ezenwo Wike says that those who sabotage government’s effort to eliminate oil bunkering should be brought to justice.

He noted that oil bunkering which affects the socio-economic development of the country should not be allowed to thrive.

The Governor said his administration has given necessary support to security agencies particularly the Nigerian Navy by providing six gunboats to secure the waterways.

“We are also procuring more gunboats for the Navy to fight pipeline vandalism and oil bunkering in the State.

“The issue of security should not be politicized as crime and criminality is not synonymous to a particular state.

“No Country or State can say that they do not have insecurity. Here in the State because we are working in synergy with security agencies, insecurity has reduced.

“Let me appeal that the efforts you put in to apprehend those who attack you personnel should also be applied to prosecute those who affect our economy,” he stated.

Governor Wike called on the Federal Government to implement the report that would be submitted at the end of the study tour .

He enjoined the participants to use their visit to see the developmental strides in the State.

“We are constructing five flyovers simultaneously. The Mother and Child Hospital is at furnishing stage and the Real Madrid Football Academy will soon open for academic activities,” he added.

He said the theme of the Course is, “Curbing Pipeline Vandalism Towards Enhancing Socio-economic Development in Rivers State.”

“In choosing to carry out this study, we recognize that the Rivers State Government and other security agencies have been doing so much to curb the menace of pipeline vandalism.

“The participants of the War College will interact with the people and make recommendations to the Nigerian Navy for implementation,” he stated.