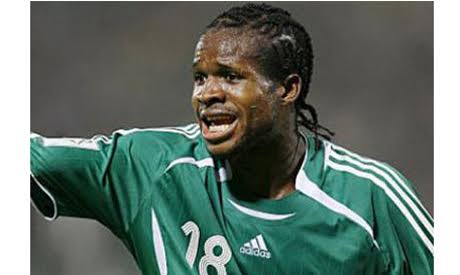 The 36-year-old was a victim of another kidnapping incident in his hometown on Sunday.

Former Nigeria and Udinese midfielder Christian Obodo was kidnapped in Warri – a city in the South-South region of Nigeria – on Sunday but he has regained his freedom without any injury.

Sunday’s incident was the second time the 36-year-old was kidnapped in Delta State, after he was abducted by gunmen in June 2012 and rescued a day later in a police raid.

Obodo, who spent over a decade as a player in Italy, narrated his ordeal after his release on Monday and he stated the kidnappers blamed the Super Eagles for their loss after betting on the Sierra Leone game.

“It was really discomforting locked up in a hot car trunk for hours,” he was quoted as saying on Brila FM.

“The kidnappers were even telling me about how they lost money for placing bets on Nigeria to score in the second half.

“They didn’t hurt me or intimidate me but I can’t understand the reason for anyone to want to put me through this sort of thing over again.”

During a telephone interview with AFP, Obodo divulged further information regarding the incident.

“They pushed my girlfriend out of the car,” he told AFP by phone while mentioning that a third gunman drove in a car behind them.

“I was praying and trying to hold a conversation with them asking them what have I done, but they barked at me and told me to keep quiet and that if I make any sound I was going to be killed.”

The Delta State Police Command, through its spokesperson Onome Onovawakpoyeya, confirmed the abduction and she stated that the former Fiorentina player was spotted when he stopped by the road to buy fruit.

“Obodo was kidnapped at about 17:00 on Sunday around Ishaka Hotel just along Refinery Road,” Onovawakpoyeya told the Punch.

“He was with his girlfriend when he was abducted. They both stopped by the road to buy bananas.”

Obodo, before retiring in 2017, had a nomadic playing career across Europe with stints in Italy, Greece, Belarus, Romania and Portugal.

On the international scene, he scored four goals in 21 appearances for the Super Eagles having been a regular in the side from 2003 to 2008.