Home PUO NEWS Ikpeazu Raises The Bar In Crime Prevention In Abia State With The... 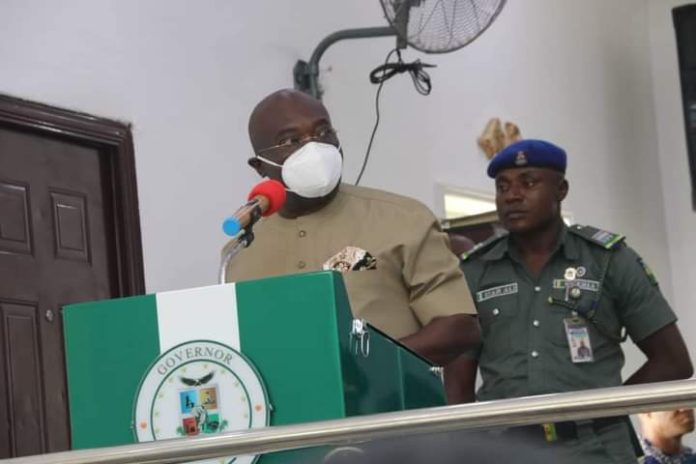 Abia State Governor, Dr Okezie Victor Ikpeazu says his desire to make Abia the safest State in Nigeria is to create an ambience that will encourage free enterprise and sustain the pillars of development of his government.

The Governor stated this at the official launch of the Abia State Crime Prevention and Management System (CPAMS) and inauguration of Nine Member Committee to plan the proposed visit of the Inspector General of Police, Mohammed Adamu to the State held at Michael Okpara Auditorium Umuahia. He expressed joy that the CPAMS conceptualized by his administration has become a reality expressing the hope that the system will be capable of providing solutions to policing not only in Abia State, but Nigeria as a whole.

According to the Governor, proactive policing requires that a crime officer must be ahead of criminals adding that except through digitalisation, time will come when police officers will find it difficult to cope with new waves of criminal activities.
The Governor stated that with diligent implementation of CPAMS in Abia State, it will be difficult for a criminal to be a first offender whereas he has criminal records.
Dr Ikpeazu also said that with the system, community participation with the police will become easier while reward system for diligent officers will also be done with ease. He announced that through the Ministry of Homeland Security , his government will provide solar powered systems in all Police Stations in the State as well as provide computers to all Police Divisions including the office of the Inspector General of police, Deputy Inspector General of Police and the Commissioner of Police for easy coordination of the scheme.

He commended the CPAMS team led by the Coordinator, Endi Ezengwa for their hardwork as well as the Homeland Security officers that have graduated and urged them to collaborate with the Police and other security agencies in the State to make Abia crime free.

Earlier, the Commissioner for Homeland Security, Prince Dan Okoli thanked the Governor for his commitment in making Abia the most peaceful and secure state in Nigeria and assured that his Ministry will support him to realize the dream of making Abia a crime-free State.
In a goodwill message, the State Commissioner of Police, CP Janet Agbede who disclosed that the modus operandi of crime prevention is not static maintained that it is in view of this that Governor Ikpeazu, after consultation with stakeholders rolled out the programme. She said that the launch will lead to a more pragmatic security network involving all stakeholders as well as ensure effective policing in the State.
She adviced Abians to stay away from crime and assured that Abia is one of the most security conscious states in Nigeria.

Also, the Coordinator Abia CPAMS, Endi Ezengwa said CPAMS which is a Crime Prevention and Management System is the first of its kind in Nigeria and has the capacity to deter criminals and improve community access to the police and institute confidence among the people and appealed to Abians to support the program.

The event which featured demonstration of the operations of CPAMS by the Police trainees and officers of the Abia Homeland Security Watch and presentation of certificates to CPAMS trainees, attracted the Deputy Governor, Sir Ude Oko Chukwu , Secretary to the State Government, other top government officials and Traditional Rulers within the State.