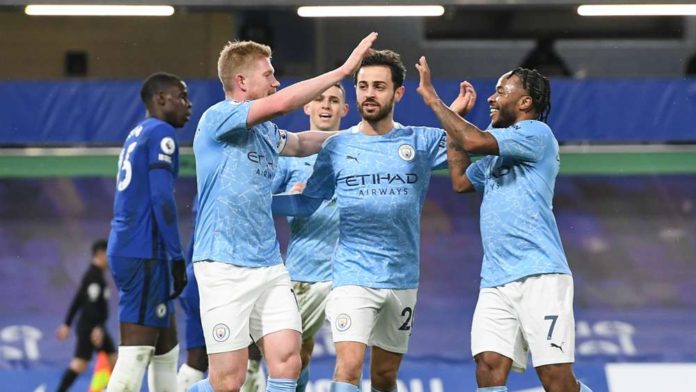 Kevin De Bruyne scored one and assisted another as Manchester City eased to a 3-1 victory at Chelsea on Sunday.

Manchester City impressively overcame the absence of key first-team players due to coronavirus as they eased to a 3-1 victory over Chelsea at Stamford Bridge.

Pep Guardiola’s side had their game at Everton postponed earlier this week due to a COVID-19 outbreak at the club, one that left them without six squad members for their first match of 2021.

But City, who handed a league debut to goalkeeper Zack Steffen, were three up inside 34 minutes thanks to strikes from Ilkay Gundogan, Phil Foden and star of the show Kevin De Bruyne.

Callum Hudson-Odoi scored a late consolation for Chelsea but that was the only disappointment for the visitors, who made it three league wins in a row to move up to fifth in the table, within four points of top spot with a game in hand. Chelsea, meanwhile, remain down in eighth position.

4 – Chelsea have suffered as many defeats in their last six Premier League games (W1 D1 L4) as they did in the 23 matches beforehand (W14 D5 L4). Mounting. pic.twitter.com/GxvuwKYTlX

— OptaJoe (@OptaJoe) January 3, 2021
City started without a recognised striker and it was Gundogan who was in the most advanced position when turning away from Thiago Silva to fire past Edouard Mendy for the opener.

‘You’re greedy & not the only one’ – Saleh slams ex-Barcelona...