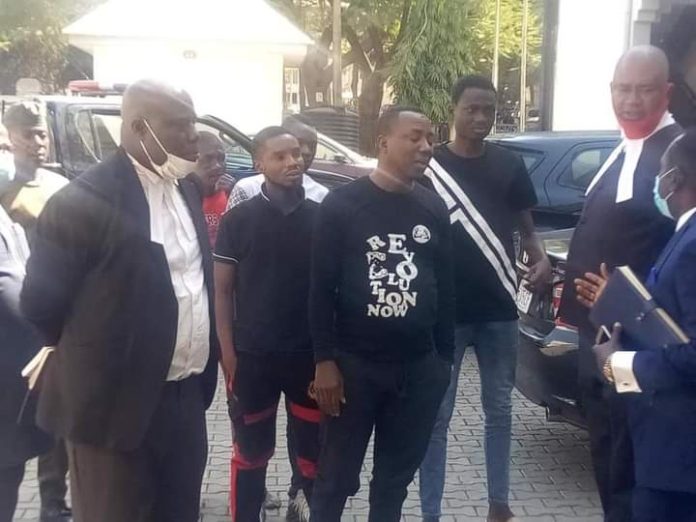 A Magistrate court sitting in Wuse Zone 2, Abuja has ordered the remand of Omoyele Sowore and four others at Kuje Correctional Centre.

This is pending when there formal bail application will be heard tomorrow, January 5, 2020.

Sowore is being arraigned alongside four others by the Federal Government on three charges of criminal conspiracy, unlawful assembly, and attempting to incite others.

Although they all pleaded not guilty to the charges, the prosecution alleged that the defendants were arrested on New Year’s eve with placards calling for a violent revolution against President Muhammadu Buhari.

Sowore was arrested by the police for leading a protest against bad governance on New Year’s Eve in Abuja.

Sowore had earlier before the protest charged Nigerians on Twitter to hold a crossover protest by picking up a candle and a placard showing their grievances against the President Muhammadu Buhari administration.

“How about a crossover protest/uprising tonight? Anyone willing to participate? Pick up a candle and a placard showing your grievances against the regime; let’s upload our short videos and photos across our social media platforms. Let’s welcome the regime to a resolute 2021!

“#CrossoverWithProtest against tyrant @mbuhari’s regime, candlelight for #LekkiMassacre; a placard for #EndBadGovernment; procession to usher in #Revolutionary 2021, a fist for victims of repression-frozen bank accounts, malicious prosecution and detention of #Endsars activists.

“#Crossoverwithprotest starts at 11.30 till 12.30 am across Nigeria, a candle, a placard and fireworks to usher in a RESOLUTE 2021 in Nigeria! Join with your friends and neighbours ‪#EndSARS. ‪#ObigboMassacre ‪#LekkiMassacre ‪#EndBadGoveranceInNigeria ‪#BuhariTrainwreck ‪#RevolutionNow,” Sowore tweeted on Sunday, December 31, 2020.

#CrossoverWithProtest against tyrant @mbuhari’s regime, a candlelight for #LekkiMassacre; A placard for #EndBadGovernment; procession to usher in #Revolutionary 2021, A fist for victims of repression-frozen bank accounts, malicious prosecution and detention of #Endsars activists https://t.co/x1IckSmlXy

The protest was eventually joined by others in states including Ondo and Kaduna.

This is not the first time Sowore will be arrested. He was detained for over 100 days in 2019 for calling for a #RevolutionNowProtest.