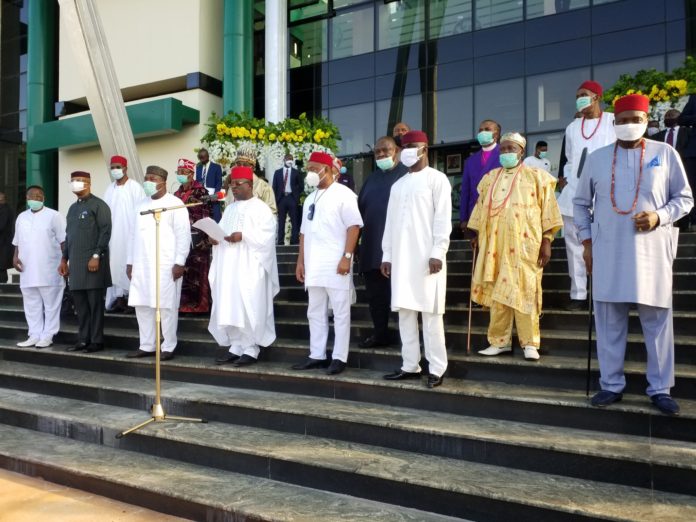 South-East Governors, yesterday came hard on the initiators and conveners of the Igbere meeting and dissociated themselves from it.

The Governors argued that “if there should be such a meeting which they feel is very necessary, the governors must be seen to be informed and be part and parcel of calling such a meeting.”

Chairman of the South-East Governors’ Forum and Governor of Ebonyi State, Engr. David Umahi, stated this during a virtual meeting with other governors of the region.

Said Umahi: “Today 5th January, 2021, the South East Governors had their meeting and all the governors were in attendance and the meeting resolved as follows:

“There was a bi-partisan meeting called today and the initiator went ahead to use the names of governors without consulting them as part of the conveners of such a meeting.

“The Governors of South-East frown at such attitude and would want to disassociate themselves from such a meeting. If there should be such a meeting which they feel is very necessary, the governors must be seen to be informed and be part and parcel of calling such a meeting. They strongly feel that Ohanaeze is in part position to speak on such issues.

“So, they want to say that the Governors are not involved and they encouraged all their people to boycott such a meeting.”

On the issue of security, Governor Umahi said the governors are so much worried on the killings and kidnappings that are going on by our people in south east; killing our own people and then killing security agencies and the situation is being heightened by the activities of very desperate politicians.

“There are so many desperate politicians in all the political parties that are so desperate for power and they have aligned with some bandits in South-East to destabilise the nation.”

Umahi further stated that the governors of the zone would ”do everything possible to ensure that all our people are protected; the security agencies and all the people that are from other regions that are living with us.

RUGA will not happen in Edo – Obaseki