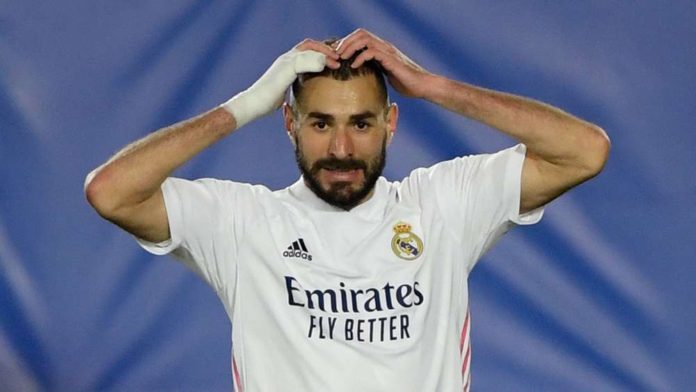 The French forward is accused of conspiracy to attempt blackmail, with his lawyer claiming the player “has nothing to be ashamed of”.

Real Madrid’s Karim Benzema is to face trial over his alleged involvement in the attempted blackmail of Mathieu Valbuena relating to a sex tape apparently featuring the Olympiakos star.

The former Lyon forward is accused of trying to extort money from his fellow France international ahead of a friendly against Armenia five years ago.

And, according to AFP, the French forward has now been informed by the Versailles prosecutor’s office that he will be taken to court at an as yet unspecified date.

Benzema’s lawyer responded to the news that his client is being charged with conspiracy to attempt blackmail by telling the Efe news agency: “The decision to try him is absurd and is unfair cruelty.

“Benzema has nothing to be ashamed of in this case.”

Valbuena’s lawyer Paul-Albert Iweins told L’Equipe that the decision to go to trial is “the logical continuation of the instruction which perfectly established the participation of the various people”.

Benzema has spoken out on the matter in question on a regular basis in recent years, with the Frenchman accusing Valbuena of dragging his name “through the mud”.

He told L’Equipe in May 2017: “He said he would not have lodged a complaint if he knew I was involved in the story. For more than a year and a half I’m his worst enemy, a bad guy, a thug, I have to be punished, dragged through the mud, my name and that of my family, in the dirt.

“It has been almost two years since I was forbidden to see my best friend [Karim Zenati], if not we go to prison, and he is quiet, but he must stop his crap, and I do not know why he keeps talking about me already.

“[Saying] I am his enemy, I wanted to take money from him… he really has to stop inventing, it makes me mad to keep on lying.

“He just had to tell the truth about what really happened, and he would not have had all of this.”

Benzema, who denies any wrongdoing, has been overlooked for international duty with France ever since the allegations made against him.

The 33-year-old has not figured for Les Bleus since November 2015, when the last of his 81 caps was earned.

A succession of national team coaches have kept him on the outside looking in, despite impressive standards being maintained at club level with Madrid.

Benzema has remained a prolific source of goals for the Blancos, with 261 efforts recorded through 533 appearances. He ranked eighth in Goal 50 in November.

A prominent role at Santiago Bernabeu has been taken on since Cristiano Ronaldo departed for Juventus in 2018, with his contribution helping Zinedine Zidane’s side to another La Liga title in 2019-20.