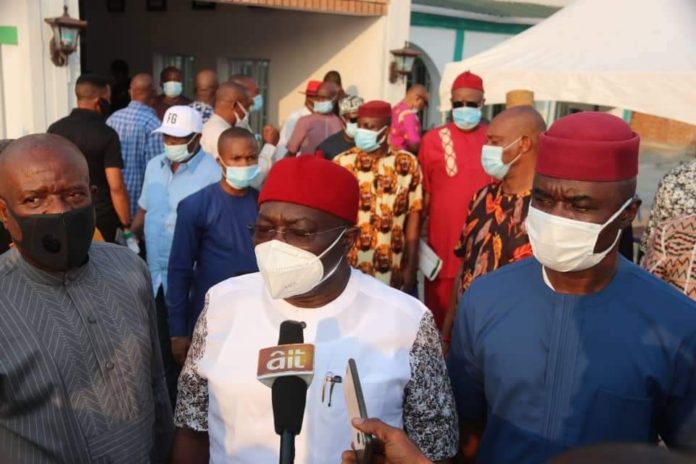 Governor Okezie Ikpeazu says that the ruling Peoples Democratic Party (PDP) in Abia State remains the party of choice in the State and as such, all hands must be on deck to consolidate on the gains and strenght of the party in the State.
The Governor stated this today at the Dr. Micheal Okpara Auditorium Umuahia while addressing a meeting of the Stakeholders of the party, the first of such meetings for the year 2021.

Governor Ikpeazu made it clear that the party remains as strong as ever in the State and restated his strong membership of the party and dismissing rumors of his alleged defection plans as unfounded.

The Governor reassured party stakeholders that there is no cause for alarm over the rumored defection of party members to other parties in the stating that the two persons who left the party did so because he refused to make a commitment to hand over to them automatic tickets of the party for the 2023 elections. The Governor made it clear that he had no regrets over his stance because it was too early in the day to make such commitments to any person, stating that when the time is right, the party will choose her candidates. He advised party members not to allow personal ambitions to override party supremacy at a time when the general elections are almost two years away.

The Governor congratulated the newly elected Executive Chairmen of the 17 Local Government Areas in the State and urged them to embark on people oriented projects in their areas and always ensure that they keep the communication channels open between them and members of the party in their councils.

The Governor assured party members that the baton he received from the last administration will remain intact with him and by the grace of God, the next administration in the State will be a PDP government.

At the end of the meeting, Governor Okezie Ikpeazu, the National Organizing Secretary, Col Austin Akobundu and State Party Chairman, Rt Hon Asiforo Okere spoke to the Press and briefed them on the proceedings of the meeting.

The meeting will be held on a regular basis to appraise and reappraise the activities of the party in the State.