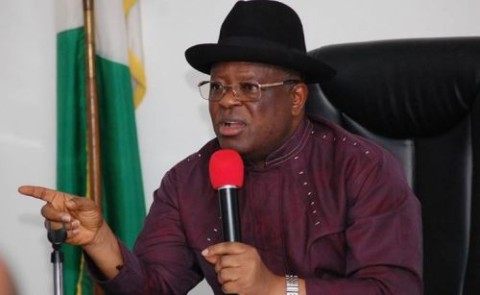 On Wednesday the Ebonyi State government has reacted to the alleged use of its Abuja liaison office as a kidnap hideout by hoodlums suspected to hail from Uburu community, the hometown of Governor David Umahi.

Recall that the Federal Capital Territory (FCT) Police Command arrested and paraded one Chukwu Betherand who was said to be the younger brother to Governor Umahi’s wife, Mrs. Rachel Umahi.

The alleged kidnappers according to police sources were using the Ebonyi State Governor’s Lodge in the high brow Maitama area of Abuja as a hideout for keeping their kidnapped victims.

Investigation revealed that Chukwu Samuel 25, and Kelechi Ngene were allegedly arrested at the point of collecting ransom from a relative of their victim.

The FCT police operatives announced that it rescued three victims allegedly kidnapped by the suspects.

But Ebonyi State government through the Commissioner for Internal Security and Border Peace, Stanley Okoro Emegha threatened to sue whoever links the name of governor David Umahi to the incident.

According to him: “You know that people are being petty, the liaison office is in Abuja, the force headquarters is there and they have a commissioner of police in charge of the FCT, they didn’t put up a petition to any of the security agencies, then they went to online to be writing trash and people are believing it and they are calling me to react to that, I’m a commissioner down here in Ebonyi State and not a Commissioner in Abuja.

“I’m a Commissioner in charge of Internal Security in Ebonyi State and not Abuja. That thing is absolute trash, its nonsense and the people are petty by writing or alleging such, there are lots of avenues, you can deploy to make sure that you write an actual thing.

“People can be funny, must everything be taken to politics? You know such a thing is character assassinations. They are spoiling the image of the Ebonyi government. If I can get hold of the people or online that is circulating it, we will hold the person and sue him or her to court.

“Somebody will just wake up and find something to tarnish the image of the governor. They cannot distract the governor from what he is doing.