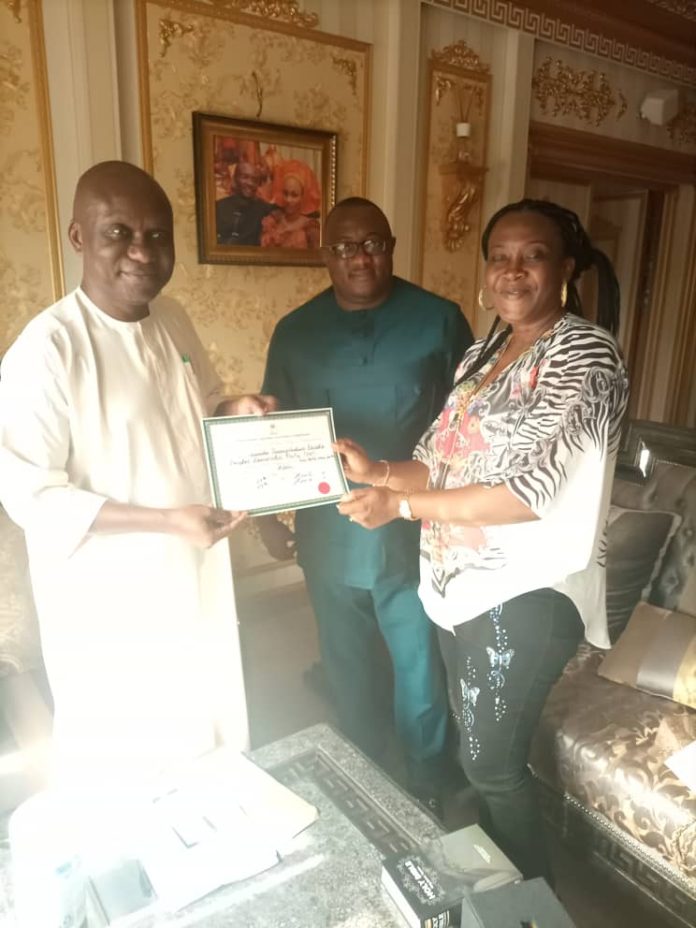 The Speaker of Abia State House of Assembly, Rt Hon Chinedum Enyinnaya Orji today received the Representative-elect of Aba North/Aba South Federal Constituency, Hon Chimaobi Ebisike who came with his wife to show the Abia Speaker his Certificate of Return which he received from the Independent National Electoral Commission (INEC).

During the visit, Rt Hon Chinedum Enyinnaya Orji extolled Hon Ebisike’s perseverance throughout the campaign and in the course of the run up to the bye-election. He advised him never to forget his constituency, remain dedicated to the cause of Abia State Government and be greatly loyal to the Governor, Dr Okezie Ikpeazu.

The Speaker also told Ebisike that his political growth was greatly dependent upon his performance at the National Assembly, and that he should not mismanage the opportunity.

While addressing the crowd of youths and women that visited him along with Hon Ebisike, Rt Hon Chinedum Enyinnaya Orji thanked them for their support before, during and after the bye-election, saying they remain the live wire of the party.

Amidst victory songs and chants hailing the Speaker for his role in the emergence and eventual victory of Ebisike at the poll, the Speaker said he was overwhelmed by their solidarity and for heeding the call of PDP to troop out and vote for the Party’s candidate, promising to come to Aba to reciprocate their good gesture.

God Has Written Our Victory in Heaven and Earth,Says Mao Ohuabunwa