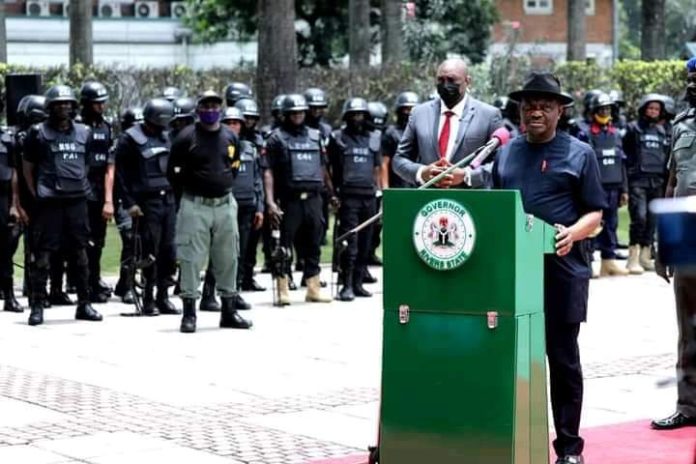 Governor of Rivers State, Nyesom Ezenwo Wike, says two armoured helicopters worth over $10 Million that the State government gave to the Nigerian Airforce to fight crude oil theft and sea piracy in the State have been diverted to fight Boko Haram.

The governor has meanwhile warned that the State will not hesitate to withdraw the gunboats it’s about to present to the Army, Navy and Police if they are deployed for use in other states.

He stated this at the presentation of twenty nine (29) operational vehicles to the Police at the re-launching of the Rivers State security outfit code named, C.4.I, at the Government House, Port Harcourt on Thursday.

The governor explained that his administration has continually demonstrated its resolve to rid the State of criminality through provision of operational vehicles, gunboats and other forms of support for the security agencies.

He however expressed dismay that some of the equipment provided by the State government to support security agencies fight crime are often diverted to other States at the detriment of Rivers State.

Governor Wike said with the re-launch of C.4.I security outfit, the Rivers State Police Command should become more proactive in fighting crime. He urged the police and other security agencies to take the war against criminality to the criminals.

The governor disclosed that in the next few weeks the Rivers State government will donate more operational vehicles and equipment to the C.4.I security outfit to enhance their operations. In addition, he said the State will also give five gunboats each to Nigerian Army, Nigerian Navy and Police to tackle sea piracy.

“But let the gunboats remain within the territory of Rivers State. I am not here to buy gunboats for any other state. I am buying gunboat for the protection of the people that do business and live in Rivers State and their property. Don’t carry our gunboat and say the Chief of Army Staff, Chief of Naval Staff, IG said bring the gunboat to so, so place. Every state is to protect their territory. The day I hear you take our gunboats to other state, I will collect them back.

The governor assured the police personnel attached to the C.4.I unit that if they loss their life in active service the State government will take care of their families.

“Let me tell you what I will do for people of C.4.I. If any of you in course of this work, in course of fighting crime and criminality dies, Rivers state government will take care of your family.”

He disclosed that the State government will soon deliver latest state of the art equipment to the Department of State Services (DSS) to enhance their operational capability to track down criminals.

He noted that security is expensive and commended Governor Wike for his continual support to the police.

Rivers State Commissioner of Police, Mr Friday Eboka said the 29 operational vehicles, 200 bulletproof vests and helmets provided by the governor will serve as moral booster for the personnel of the C.4.I as they strive to reduce crime and criminality to its barest minimum in the State.

He warned kidnappers, cultists and armed robbers to have a rethink as Rivers State is no longer safe for their nefarious activities.