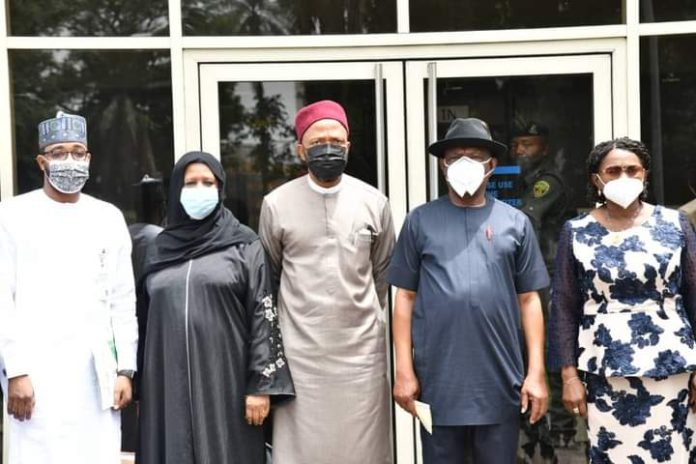 Governor Nyesom Ezenwo Wike of Rivers State has dissociated himself from those who are calling for the scrapping of the counterpart funding system for basic education in the country.

The governor declared the stance of the Rivers State Government on such calls when the Minister of State for Education, Chukwuemeka Nwajiuba, paid a courtesy visit to him at Government House, Port Harcourt on Thursday.

Governor Wike said the counterpart funding arrangement avails state governments the opportunity to show commitment in the provision of good educational foundation for children in their states.

“Here in this state, from the records that I have, there are over a hundred thousand out-of-school children. But they have been able to bring back 36 thousand to the classrooms. This is commendable.

“We have also accessed our counterpart funds from UBEC up to 2019. We are preparing to access 2020 funds. If you believe in the education of your people, then as a government you must play a very prominent role.

“I’m not one of those governors who will say that the federal government should scrap the counterpart funding. I hear, the Chairman of Governors Forum said so but I don’t agree to that. Every state must be committed.

“You cannot say you want to depend on federal government money alone, no. You as a state government must also show that you are committed to doing this. It is sad that in this country, everybody wants everything to come to them as free.”

The governor decried the abysmal budgetary allocation provided for education in the federal government budget. According to him, no meaningful development can be achieved without education.

Governor Wike stated that his administration understands the place of education in development and that is why not less than 30 percent is allocated to the sector.

“For us, education is basic. We can’t get it right until we focus on education. It’s unfortunate that the kind of budget I see for education in this country is terrible.

“When I see budget for Defence and others, and that of education that is either 2, 3, 7, or 10 percent of the budget and I know that doesn’t make sense.

“If you cannot put money in education and health, then you can’t get it right. You don’t need to manage with education. It is one sector that government must understand that for any country to be developed, then education is key.

“In this state, we have never given education less than 30 percent of our budget. Education and health are key. So, the federal government should try as much as they can to see that more funding is given to education.”

Speaking further, Governor Wike commended the Minister of State for Education and his Senior Minister for driving the programmes of the ministry apolitically.

Governor Wike noted that it is obvious that political consideration was not used to decide on Rivers State to be the first place to launch the “Better Education Service Delivery for All Programme for Result” among other states in the zone.

Minister of State for Education, Chukwuemeka Nwajiuba, said they were in the state for the official launch of “Better Education Service Delivery for All Programme for Result”

He said the programme is a jointly owned facility of World Bank and the Federal Government that started in 2018 that is geared towards addressing the issue of out-of- school children across the country and ensure they return to the classrooms.

EFCC Has Not Dropped Charges Against Diezani, Others