Home FEATURED Distribution of rice: I am not responsible, but I commend the groups... 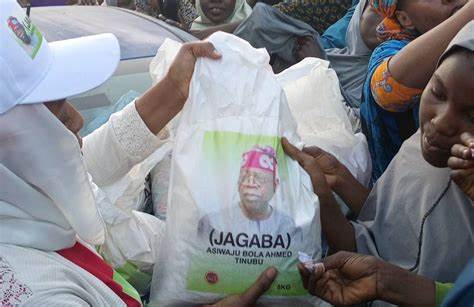 The National Leader of the All Progressives Congress, APC, Bola Tinubu has denied distributing bags of rice to IDPs in Borno State.

Recall that the Speaker of the Lagos State House of Assembly, Rt Hon Mudasiru Obasa had donated 10,000 bags of 15kg rice to Internally Displaced Persons, IDPs, in Borno State.

The rice which had the photograph of Tinubu was said to be aimed at cushioning the hardship faced by thousands of IDPs during the holy month of Ramadan fasting.

Reacting, Tinubu insisted that he was not responsible for the gesture.

In a statement by his Media Aide, Tunde Rahman, the former Lagos State governor, however, commended the efforts of the various groups for their benevolence, NAN reports.

“We have seen the images being circulated of bags of rice depicting Asiwaju’s face being distributed across parts of the North.

Why VAT was removed from domestic air fares – Buhari explains