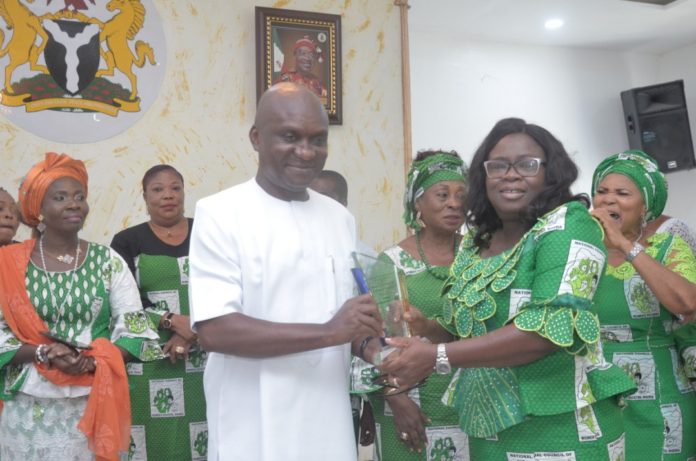 The National Council for Women Societies (NCWS) on Thursday honoured the Speaker of Abia State House of Assembly, Rt Hon Chinedum Enyinnaya Orji with an Award of Excellence during their Summit and Grand Awards Foundation Laying ceremony.

The event which held at the Michael Okpara Auditorium, Umuahia, amid pomp and splendour was also graced by the Wife of the Governor, Dr Mrs Nkechi Ikpeazu, the Deputy Governor, Rt Hon Ude Oko Chukwu, PhD, and other top government functionaries.

Presenting the Award, the Abia branch of NCWS, organisers of the event, described the Speaker as a man who has touched many lives positively especially that of women and youths, and impacted communities in no small measure. They further described him as a shining light whose exceptional humane leadership qualities have so much endeared him to people of all ages and status.

The women who reeled out the Speaker’s numerous achievements and public spirited gestures joined in describing the 7th Abia State House of Assembly as an “Assembly of Many Firsts” based on the many innovative and rare people oriented Motions and Bills passed by the House including the Abians in Diaspora Commission Law, the first of its kind in the entire federation, and those directly promoting and protecting the cause of women in the State

Responding, Rt Hon Chinedum Enyinnaya Orji thanked God for blessing Abia with the women whom he described as superlative and high flying, saying they have brought fame to the State through their respective endeavours.

The Speaker said he was impressed with the way the Wife of the Governor has been able to galvanize the women in the state, uniting and supporting them, and further extolled her for her support to her husband, the Governor.

Expressing gratitude to the First Lady, the Speaker narrated the huge positive role she played in ensuring that the Abians in Diaspora Commission Bill was passed into Law. He therefore called on the women to continue to support the Wife of the Governor so that she can remain encouraged to continue with her good deeds to society.

Finally, the Speaker thanked the women for the Award of Excellence bestowed on him and promised never to relent in his political ideology of contributing to the provision of infrastructure to the people and empowerment of the citizens.

Presentation of the Award of Excellence to the Speaker was done by Dr Mrs Nkechi Ikpeazu, Wife of the Governor of Abia State.

The National Council for Women Societies is the umbrella organization for all women associations and as their members.