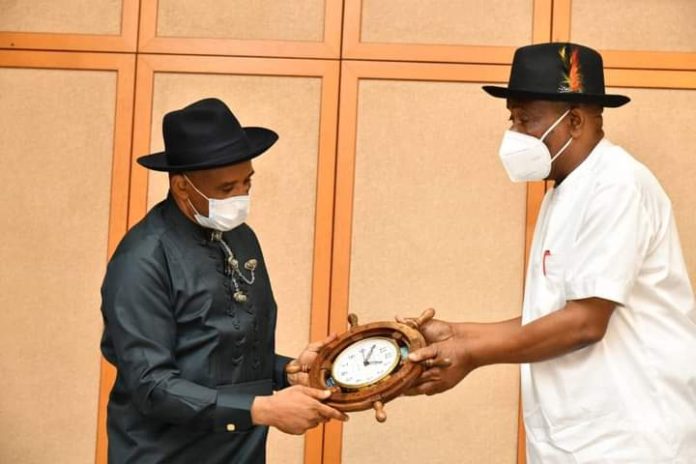 Governor of Rivers State, Nyesom Ezenwo Wike has urged the leadership of the Nigerian Maritime Administration and Safety Agency (NIMASA) to return its Cabotage Services Department back to Port Harcourt.

The governor gave the charge when he hosted the Director General of the agency, Dr Bashir Yusuf Jamoh , on courtesy visit at Government House, Port Harcourt on Tuesday.

Governor Wike said the operations of the Cabotage Services Department of NIMASA used to be in Port Harcourt, the Rivers State capital, but was taken to Lagos without justification.

“We had a Cabotage Department here in Tombia Street (New GRA), your people moved it to Lagos. Is there any offence that Rivers State has committed against Nigeria? You may know, I don’t know of any offence any person can say we have committed.”

The governor said despite his administration procurement of gunboats for the security agencies, particularly, the Police and Navy to assist them fight sea piracy and to ensure safety on the waterways for the business activities of NIMASA to thrive, the state does not get anything in return.

Governor Wike commended new NIMASA DG for the new initiative of harnessing ocean resources to serve as alternative revenue source that will end the mono-economy status of Nigeria.

“Let me thank you as one of those who have looked into the future that Nigeria cannot continue to depend solely on one product and that is oil. There comes a time that the wells will be dry up, and when the wells are dried, what is the alternative? Is it at that time we will begin to seek for an alternative? So you are on the right track by identifying that we should go for blue economy.”

Speaking further, Governor Wike pledged to partner the agency in the area of human capital development and told them to consider adopting the Government Sea School, Isaka as institution to train seafarers.

“We have Sea School, Isaka in Okrika Local Government. It is a good place to train seafarers. That is the first Sea School in this country.

“There is nothing wrong for you to partner with the state government to develop it. When they are trained, you can then move them as your seafarers to work in your maritime industry. Let us not abandon old things and begin to create new ones. Let’s develop the ones we have. Let us not be spending money in something that will take a long time. This will help the industry and create a lot of manpower for our people and employment.”

Governor Wike bemoan the failure of the Minister of Transportation, Chibuike Amaechi to leverage on his vintage position to revive the Port Harcourt and Onne ports in order to generate employment opportunities for the youths in the maritime sector.

Earlier, the Director General of Nigerian Maritime Administration and Safety Agency (NIMASA), Dr. Bashir Yusuf Jamoh, said the agency new thinking is in the direction of divesting the country’s economy with its 10 years plan to develop ocean resources in the country.

Jamoh explained that his tour to the 8 littoral states of which Rivers is a part of, is intended to sell the new thinking to them and the need to key into the initiative. He urged the Rivers state government to set up a committee to work with the agency in identifying its areas of comparative advantage in harnessing its vast ocean resources.

“The agency commenced the issue of Blue Economy to ensure that we have something that we will fall back on. Let us give ourselves at least within the next 10 years, we can be able to develop our ocean resources.”

The DG appreciated Governor Wike’s effort in rebuilding Rivers State into reckoning with tremendous investment in infrastructure, health, education and the judiciary that have ultimately better the life of Rivers residence.