Home PUO NEWS Wike Says Implementation Of Judicial Autonomy Must Be In Line With Constitutional... 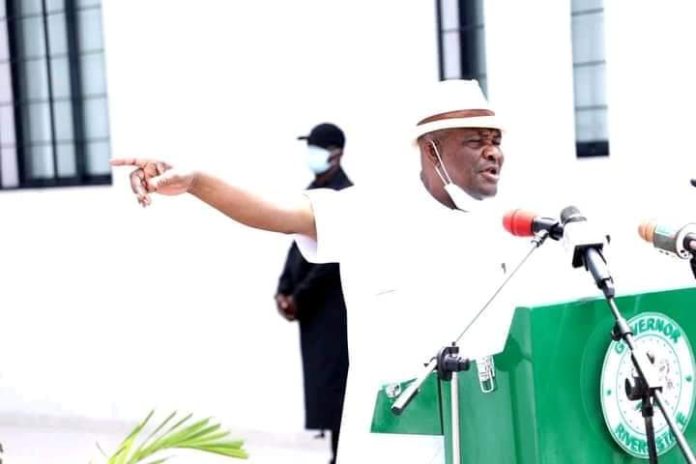 The governor made the observation at the inauguration and handover of the National Industrial Court Judges Quarters in Old Government Residential Area, Port Harcourt on Thursday.

Governor Wike explained that under a federal system of government, it is only the executive arm of government, at all the tiers, that has the powers to present the annual budget to either State or National Assembly and also signed it into law.

According to him, the new narrative that a presidential implementation committee has been set up and will direct governors to sign budgetary allocations for the judiciary is purely unconstitutional.

Governor Wike said a federal government that is promoting autonomy of the judiciary should not have allowed the nation’s courts to be shut for about two months by Judiciary Staff Union of Nigeria (JUSUN).

Speaking further, the governor said his administration has fully implemented the autonomy of the judiciary and the legislature with releases of their financial entitlements as captured in the budget up till 2021.

Governor Wike explained that the funds released by Rivers State to the judiciary far exceeds the planned deductions by the federal government. He further declared that his administration is not owing parliamentary workers who are also currently on sympathy strike.

He proclaimed that already the no-work no-pay policy has come into force in Rivers State and all judiciary and parliamentary workers cannot sit at work and expect salary anymore.

Speaking on one of his motivations to provide judges with official residences, Governor Wike recalled how when he was Chief of Staff, he received a call at about midnight that a judge was locked out of his rented apartment by a landlord.

“From that day, I had this feeling that judges should not be so exposed to this kind of things that could lead to lose of their life. We have also acquired land to build for judges of the federal high court who are in rented apartment. And I know that the landlord has told me that they have not paid him for several years.

“That comes to tell you the kind of autonomy of the judiciary that the federal government says they believe in. We agree but the rent of their judges is there, they have not brought the money to pay.”

Inaugurating the facility, Chief Justice of Nigeria, Ibrahim Tanko Muhammad noted that Governor Wike has remained a strong voice in the clamour for judicial independence and financial autonomy.

Represented by Justice Mary Odili of the Supreme Court of Nigeria, Justice Muhammad, said Governor Wike’s affection and innate passion for the welfare and wellbeing of the Nigerian judiciary is worthy of emulation.

“The Wike Model should be holistically espoused and replicated by other governors in the country for rapid development and growth of the Nigerian Judiciary.

“I would love to see this mind-blowing gesture, which I refer to as the emblem of humanitarianism, replicated all over the nooks and crannies of the country with a view to lifting the Nigerian Judiciary out of the current squalor which is, largely, inhibiting the seamless and speedy dispensation of justice.

“With this astounding feat, you have, for the umpteenth time, profoundly hoisted the banner of a true statesman.”

The Chief Justice declared that without any ambivalence, that Governor Wike remains a shining example in the comity of contemporary Nigerian political leaders who have the interest and welfare of the Nigerian judiciary at heart, both in words and in action.

The President of the National Industrial Court, Justice Benedict B. Kanyip said Governor Wike has made history in Nigeria by being the first to build a court and residential apartment for judges of the Industrial Court.

Similarly, the Chief Judge of Rivers State, Justice Simeon Amadi, stated that Governor Wike by providing conducive accommodation for judges has further expanded the frontiers of the access to justice.

On his part, Rivers State Attorney General and Commissioner for Justice, Prof. Zacchaeus Adangor (SAN), said Governor Wike was spurred to provide accommodation for the judges of the Industrial Court because of his quest to provide access to justice to people and residents of Rivers State.