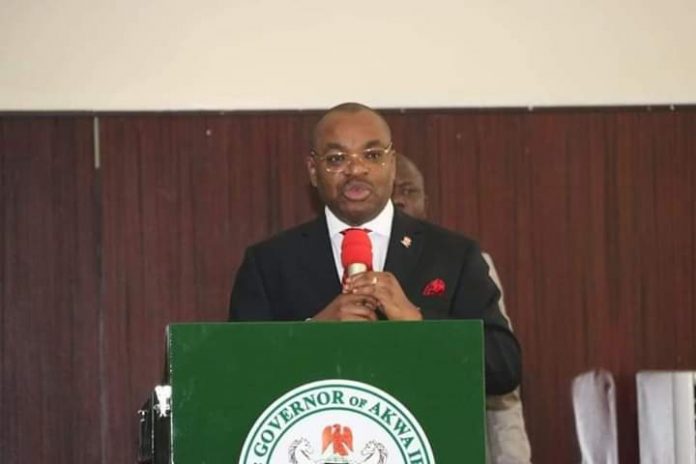 The Akwa Ibom State Governor, Mr Udom Emmanuel has disclosed that some Exclusive policies such as fiscal policy handed down from the centre have been the greatest challenge facing him in his administration.

Governor Udom who stated this at a media parley as part of activities to mark his six years in office said such policies could not align with his completion agenda.

He said there were lots of things he would have loved to do differently to achieve better results but was constrained because he has to align with the centre.

Buttressing his point, the governor said it was his intention to actualize power for all by 2022 in all the 31 Local Government Areas of the state as he has generated adequate power to do so but could not distribute because the distribution of power is on the exclusive list of the Federal government.

He, however, called on the Federal Government to liberalise the power sector so that state governors can generate as well as distribute power to the people.

He said despite the challenges facing the country, he has been able to deliver on his mandate in every sector adding that the massive good road network his administration has put in place has attracted investors to the state.

He noted that even at the peak of the COVID-19 pandemic when the economy was down he was able to bring down new aircrafts to run the State Airline.

“As a State Governor, you don’t have control over policies they are being handed down to you. The fiscal policy is completely out of my control.

“So if you have those limitations, it means a whole lot, starting from human capacity development, Industrialisation, Agriculture, Security. Even the things you could have done to wriggle out of it becomes a problem, that’s very challenging, there are lots of things you would have loved to do differently but you cannot because you have to align with the centre.

“If you look at a country of over 200 million people, there are certain things you have to change. You can’t be doing the same thing over the years without getting the same result, We should apply Environment Induced Diagnostic Procedure.

”We have been hit by two major economic recessions, we have been hit by different policies that we don’t have control over…
“Even when there was COVID, we were still releasing new things into the economy. I remember June or July last year when COVID was so strong, we were bringing in new aircrafts to run our airline. We were doing so many things.”

On the economic mishap in Nigeria, the Governor said the only solution to the problem is for the Peoples Democratic Party to return to government at the centre as the people therein have the solutions to the myriads of problems crippling the economy.

Mr Emmanuel, however, compared the PDP led government to that of the present APC saying the former left Naira to Dollar exchange at 192 and GDP at very impressive rates.

He, therefore, called on Nigerians to work to ensure that PDP is returned to take Nigeria out of its present economic distress.

“You need PDP for sustainable economic development in Nigeria. Look at how much we left Naira to Dollar exchange. Check out the inflation rate today, check the GDP. The only solution is PDP”. he declared.

Reacting to the perceived face-off with his predecessor, Sen Godswill Akpabio, Governor Emmanuel said “On my honour, I have no problem with anyone. But let me say it here that political parties are just platforms and once elections are over, we should all come together for development.”