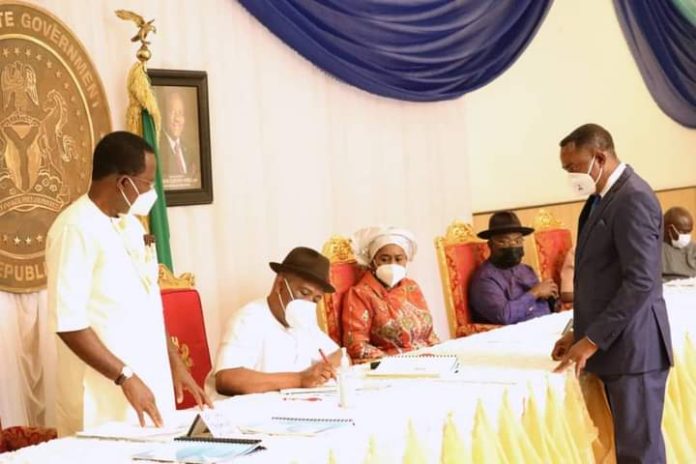 Governor Nyesom Ezenwo Wike of Rivers State has assented to two bills passed into law by the State House of Assembly to enhance access to quality healthcare and enable government fulfil contractual obligations.

The bills signed into law by the governor include: Public Procurement (amendment) Law No.1 of 2021 and Contributory Health Protection Programme Law No.3 of 2020.

Governor Wike, who signed the bills into law at the Government House, Port Harcourt on Monday, said with the signing of the Contributory Health Protection Programme bill into law, residents and people of the State who want health insurance can now participate in the scheme.

“Let me on behalf of the Executive Council sincerely thank the Speaker and members of the State Assembly for passing into law Public Procurement (amendment) Law and Contributory Health Protection Programme Law, particularly the second one that has to do with health.

“This is something that has become a reality today. We have had a lot of pressure from people and also Nigeria Medical Association so as to give health insurance to those who would want to participate. It is not compulsory for those who want to leverage of it in order to promote their health system.”

The governor urged civil servants in the State to leverage on Contributory Health Protection Programme to boost their health status.

He attributed the reason why contractors often ask for contract variation to low percentage of the project sum they receive from government. According to him, this also results in delays fulfilment of contractual obligations.

“Government ought to a lot pay penalty, because under the law, if a contractor is not paid as at when due, there ought to be sanction against the government.”

The governor said the need for the State government to expedite and fulfill it’s contractual obligations, necessitated the amendment of the Public Procurement Law.

The Speaker of the Rivers state House of Assembly, Rt. Hon. Ikuinyi-Owaji Ibani said the two bills signed into law by Governor Wike are critical elements in developing society.

He stated that with the signing of the Contributory Health Protection Programme Law, it is now incumbent on the Ministry of Health and health providers to engage in intense campaign so that residents of the State could avail themselves of the immense benefits of the scheme.

The Speaker noted that the huge investment made by Governor Wike in both primary and tertiary healthcare is geared at providing universal health coverage for the entire population.

Speaking on the Public Procurement Law, the Speaker said the Assembly saw the lapses in the last law, and decided to amend it, given that the exigencies of today is different from the exigencies of yester years .

Earlier, the Majority Leader of the House, Hon. Martins C. Amaewhule informed that the State lawmakers essentially amended Section 32 of the Procurement Law which actually provided for about 30 percent mobilisation to contractors to enable government fulfil contractual obligations.

He explained that it had become necessary to amend that Section of the principal law to provide enable the Rivers State Executive Council to make provision for over 30 percent of the contract sum to contractors whenever the need arises.