Home FEATURED Buhari will hand over in 2023 to another of his apostle –... 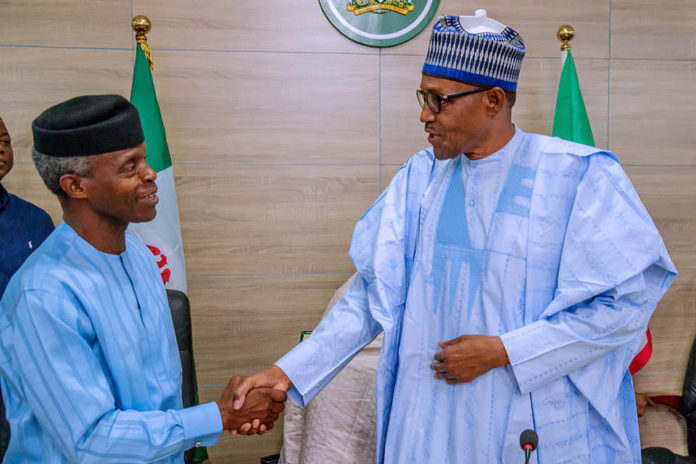 On Tuesday Vice President Yemi Osinbajo, SAN, has said that President Muhammadu Buhari will hand over to another apostle of his when he completes his assignment in 2023.

President Buhari’s tenure is expected to come to an end in 2023 when he must have completed another four years in office.

Osinbajo spoke at the Army Resource Centre, Abuja during the presentation of a book entitled ‘Buhari in Us’ written by Haruna Abdullahi.

The VIce President, who said that Buhari was conspired against and removed during his military regime, insisted that the President has given his best to Nigeria in his second coming “and will continue to do so without apology.”

“Those who are crying now and abusing our hero when you take what does not belong to a thief from a thief what do you expect him to do? Not to cry? Not to fight back? To fold his hands and begin to clap for you?” Osinbajo said.

The Vice President, represented by Senator Babafemi Ojudu, Special Adviser to the President on Political Matters, (Office of the Vice President), continued, “They will continue to cry while we continue to convince them that Mr. President is working for their long term benefit and that of their children… imagine that if he[Buhari] would have allowed to carry out the assignment then[as the military head of state] we wouldn’t have been where we are today.

“All the basic things he is putting in place today would long been done. But it was possible then for them to do what they did [over threw him] because it was military regime… what we are saying is that this man meant well for this country. He’s a creature per excellence.

“Personal wealth means nothing to him. Who among us will be in charge of petroleum the time he was and will not tremendously wealthy.

“Here is a man who was GOC, who was Governor, Minister and yet no single corruption allegation on his head… let us tell them this time that Buhari will complete his appointment unblemished for he has got majority of Nigerians benefitting from his progressive initiatives.

“And when he’s through, he will hand over to another apostle of his who would continue and consolidate on his achievements.”

Ikpeazu promises to solve Acha electricity problem within the next 30...