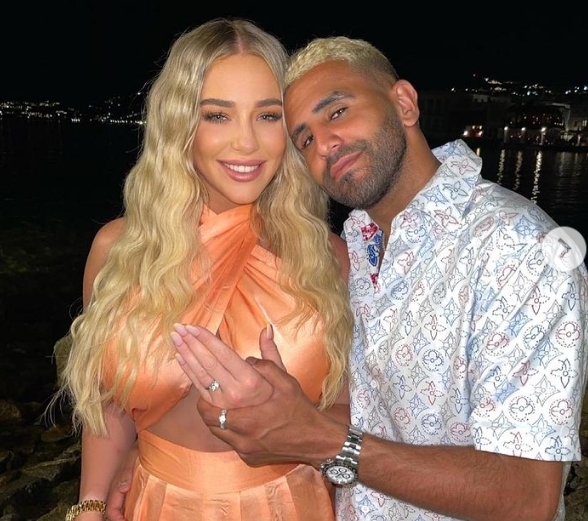 After 16 months of dating, the Algeria international has wooed the daughter of former Norwich City and Sheffield United striker Ashley Ward.

Algeria international and Manchester City star Riyad Mahrez showed his romantic side as he proposed to his fiancee Taylor Ward.

During the lovers’ luxury trip to Mykonos on Monday in the company of family and friends – which included Borussia Dortmund star Erling Haaland, the 2019 Africa Cup of Nations winner popped the question with an engagement ring worth £400k.

In a post on social media, the two-time African Player of the Year winner disclosed this development.

“So happy for everything you are the best, you’re the one I need in my life forever,” Mahrez wrote on Instagram.

On the other hand, Taylor went on Instagram to share a loved-up snap with the caption “There’s no one I’d rather do this life with, here’s to a lifetime of us. Can’t wait to grow old together I Love You.”

Mahrez made his name at Leicester – a team he joined from Le Havre in France’s second tier in 2014.

After winning the English top-flight with the Foxes, he moved to Etihad Stadium and has become an important member of Pep Guardiola’s squad.

In the just-concluded campaign, the Algerian star accounted for nine goals in 27 league games as the Citizens won the 2020-21 league title.

Speaking to RMC in a recent interview, Mahrez disclosed that given the opportunity, he would finish his career at City.

“My future? I feel very good at Man City. There is no desire to look elsewhere,” he said.

“I don’t know yet what my situation will be. But I’m happy in city and that’s where I want to be.”

When asked which of his three Premier League title wins he enjoyed the most, he replied: “The Leicester title was the very first one I won and with a team not at all expected to achieve that.

“It will always remain a special memory. Now, with City, it’s really not easy to win the league.

“Every year, the competition pushes us. When Liverpool took our title from us, we weren’t happy. And that motivated us. So, this title is also very special.”

‘Barcelona Are Having Difficulty Finding Their Way Of Playing’ – Edmilson

2019 Afcon: South Africa have proven we can’t underrate anyone –...