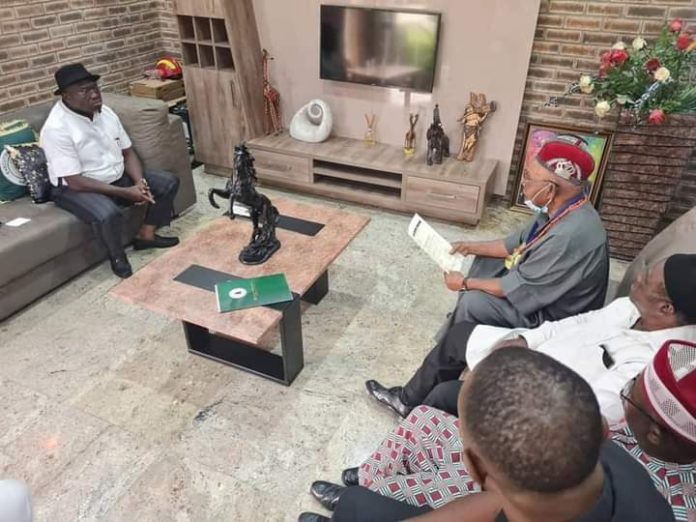 Governor Okezie Ikpeazu has yet again, expressed his deep and profound sadness on the death of the Registrar and Chief Executive of the National Examinations Council (NECO), late Professor Godswill Obioma, describing the incident as a big blow to the people of Abia State.

Governor Ikpeazu stated this today when a delegation of the leaders of Nkpa Community in Bende Local Government Area came to formally inform him of the death of their illustrious son.

Governor Ikpeazu described him as one of Nigeria’s best Professors in the field of Mathematics, and Educational Measurement and Evaluation, and noted that his appointment as Registrar and Chief Executive of NECO was purely on merit. The Governor regretted his death which he described as an act of God, and urged the people of Nkpa and the entire state to take heart. He thanked the Nkpa Community for gifting the State with such an illustrious son who broke records and grew to become a giant in the academic community.

He thanked the delegation for according him the respect of formally informing him of his death and assured that the State Government will participate in the burial arrangements whenever the family decides on a date.

Speaking earlier, the leader of the delegation, His Royal Majesty, Eze (Ambassador) Professor S O Emejuaiwe told the Governor that delegation came as a representative of the entire people of Nkpa to formally inform the Governor of the death of their son, Professor Godswill Obioma and to request that the State Government participates in the funeral rites of thr eminent Professor when the time comes.

The Traditional Ruler who is a former Nigerian Ambassador to the Czech Republic and a former Vice Chancellor of the Abia State University led a delegation of eminent sons of Nkpa which included a former Chief Judge of Abia State, Rtd Justice S I Imo and a former State Deputy Chairman of the PDP, Hon. P C Onyegbu, amongst others.