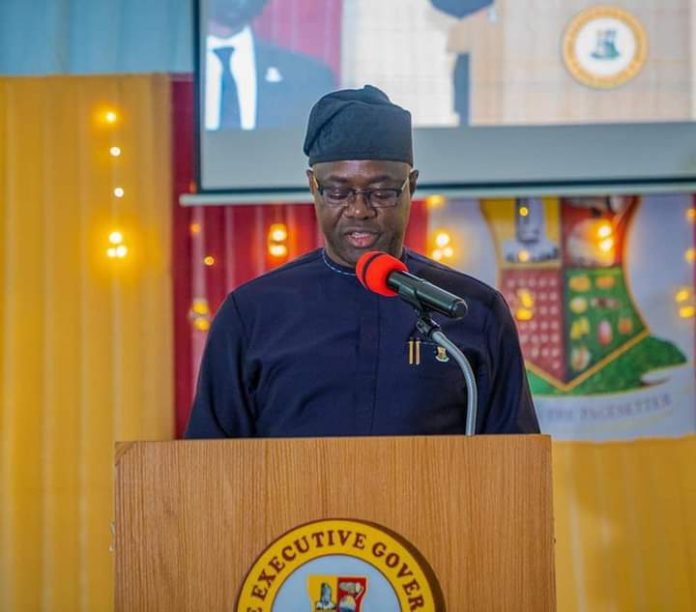 …says FG will copy our ideas when we are through

…‘Security, economy infrastructure devt, others must be top priorities’

Governor of Oyo State, ‘Seyi Makinde, has declared that his administration is busy working on the security architecture of the state to ensure a holistic solution to insecurity challenges being faced by the state.

Governor Makinde, who stated this while declaring close a two-day retreat for Local Government Chairmen, Vice Chairmen and Heads of Local Government Administrations (HLAs), in the 33 Local Government Councils of the state, held at the Ilaji Hotel and Sports Complex, Akanran, Ibadan, said that his government has, indeed, been working hard to find a lasting solution to the challenges in the all-important sector.

He stated that when ongoing efforts to rework the security system are completed, even the Federal Government will copy the state’s template.

A statement by the Chief Press Secretary to the governor, Mr. Taiwo Adisa, quoted the governor as expressing delight at the well-packaged retreat put together by Forsterfield Consulting in conjunction with the office of the Commissioner for Local Government and Chieftaincy Affairs and the Special Adviser on Strategy and Political Matters.

While addressing the chairmen, Governor Makinde admonished them to step up their game on the issue of security and take responsibility for the security of their domains, saying, though security is the responsibility of everyone in the society, those in government will be held accountable.

He also asked the council bosses to up the scale of intelligence gathering in their domains.

He said: “There is a state Security Task Force, you can replicate that at the local government level. Meet once a week and review. I can bet that by the time we are done grinding our security architecture, they will copy it at the national level in this country. So, you should step up to the table and ensure that, at each of your local government area, you take responsibility.

“Yes, it is a collective responsibility. The government alone cannot handle it but somebody will have to hold the rod of accountability and because you are the elected representatives of the people, you have to take responsibility even sometimes for things that are well beyond your control.

“The Amotekun people are there. There are challenges to get them as an agency to work with federal institutions because there is a rivalry. You guys should see it as the time to put all of them together and we have to thrive. Also, we have voluntary policing. You know some of the youths within your localities, get them into the scheme.

“When I went to Igangan, I said we would start funding the hunters and local vigilantes and we made the arrangement. Today, I am glad that the HLAs are here. We are passing through a very challenging period. So, everybody must come together to support that initiative. If we get it right, on a monthly basis, we will ensure that we make provision for them because they are quite important.
“From the report I have on Ibarapa, both open and confidential, it would have been a lot worse if not for local hunters and vigilantes. So, we need to strengthen that network.
“Most important is the issue of intelligence. The failure we got at Igangan was that people saw the bandits converging during the day but nobody reported the case. So, you also need to strengthen intelligence gathering in each of your local government areas.

“The number of the security control room is 615. Call it. When there was an issue at Igangan, I didn’t get the report that anyone called the number. It started at about 11:30 p.m. Call 615 to address any distressing issue. You need to promote the number at the local government level as elected officials. Take it upon yourselves now to ensure that every household is conversant with the 615 number and call it when they are in trouble. Also, encourage your people to say something to you when they see something so you can take the information to appropriate quarters.”

Governor Makinde, who also charged the local government officials to operate with the fear of God and put the interest of the people first in all their activities at the local councils, maintained that the people of the state expect good governance and dividends of democracy from the councils.

While charging the local council officials to consider adopting the four service point agenda or pillars of the state government or work on their own based on the peculiarities of the councils, he stated that the state government will continue to support the councils to achieve the mandate of delivering quality service to the people at the grassroots.
He said: “I am glad that we are able to organise this retreat. We tried having it when some of you were interim chairmen and chairpersons but the COVID-19 pandemic didn’t give us the opportunity. But today, we thank God that in Oyo State, COVID-19 is taking a back seat. At least, from the reports given to me, there is nobody in the Infectious Disease Centre, which is our isolation centre at Olodo.

“I want to say that the people of Oyo State voted for you and are expecting from you dividends of democracy at the local level. For the state election, most of you joined me to campaign together. So, you have all contributed to putting the government at the state level there.

“This is a good time for us to interact and for me to share one or two things with you. I am sure a lot of you are familiar with our Roadmap for Accelerated Development (2019-2023). We brought out the document before the election and I am happy to tell you that the author of the document, Professor Musbau Babatunde, is also here today. We spent several days and weeks together, knocking the document and it has served us as the blueprint for this administration. We are not going anywhere to seek knowledge on how to govern the state. Take the document anywhere in the world, it is a standard document.

The governor stated that the agenda of his government to expand the state’s economy through Agribusiness and infrastructure development has been yielding positive results, with a lot of offers coming to the state to assist it.

He said: “We think we are getting stability in the areas of agribusiness and infrastructure. We are still continuing but we can add more, and now, we are saying we should add solid minerals development and Tourism.
“So, for those local governments that are positioned to do things in the tourism and solid minerals sectors, the state will be available to support and partner with you.”
He counselled the new chairmen and vice chairmen not to be discouraged by challenges, noting that if they handle the current assignments, it could become stepping stones to something higher.

“But you have to work and it is not something that I am just thinking in my head. I have seen it happen. The governor of Rivers State, Chief Nyesom Wike, started as local government chairman in 1999. From there, he rose to the position of Chief of Staff to the Governor and then a federal minister and today he is a governor. He can even become the President of this country if he wishes. So, starting from the local government level is actually an advantage and opportunity to showcase the leadership qualities you have.

He assured that the state government will always be available to support the council chairmen, saying: “You know we are here to support you. If you are faced with challenges beyond your control, come to us and we will solve it together.”

He also admonished the civil servants at the local government levels to support the council chairmen to achieve success, noting that the government will always be ready to listen to them and give necessary support to do their jobs effectively.