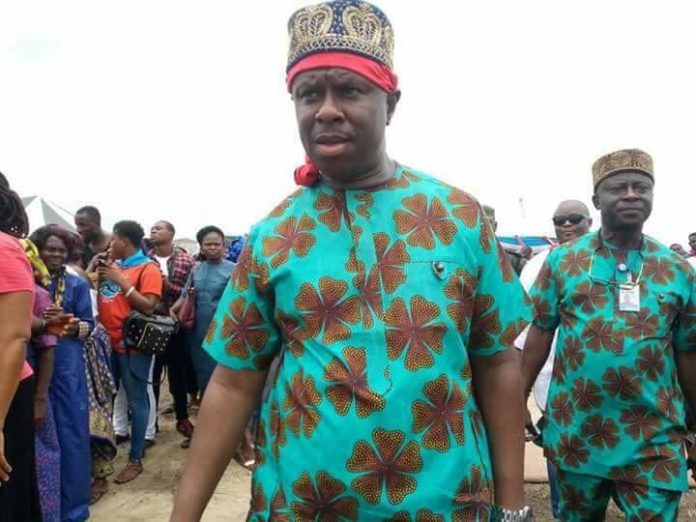 Our attention has been drawn to an article titled: “Governor Wike: When facts yield to pernicious propaganda,” written by Dr. Dakuku Peterside and published widely both in mainstream and online media platforms.

Ordinarily, we would not have bothered responding to the long winding, virulent and dubiously rambling epistle for the simple reason that Dakuku Peterside’s riposte was a rejoinder to a professionally crafted features piece painstakingly written by the highly respected journalist, Chief Dele Momodu, titled: “My Close Encounters with Gov Nyesom Wike.”

Of course, the title of Chief Momodu’s piece, “My Close Encounters with Gov Nyesom Wike”, speaks loudly for itself, as a narrative predominantly inspired by his personal observations and comprehensive fact-checking tours of Rivers State and several other official and informal meetings with Governor Wike in the line of duty.

Chief Momodu has quite appropriately replied to Dakuku Peterside’s vitriolic and pugnacious bellyaching, in a succinct, widely publicized and highly recommended must-read 7-point right of response.

This response has situated his original article in its proper context and in measured tones, exposed the perfidious intellectual treachery, which defines the polemics of our newfangled public intellectuals.

However, Dr. Peterside, apparently in an effort to justify his recently arrogated, self styled title as: “a policy and leadership expert”, obviously assumed against the backdrop of some recent poorly written, ordinary and simplistic essays, lacking the intellectual rigours and analytics of an “expert”, attempted to stand truth on its head, with an overdose of misleading passages, which sadly reflected the unfortunate tragedy of his present predicament and dilemma, as a misguided intellectual.

Our response has thus become quite necessary therefore in view of the risk that, as Dr. Peterside rightly observed, the danger of allowing misinformation or blatant falsehood to stand and flourish, is the irreparable harm it does to society, as such misinformation leads to the arrest of social development and alters the popular aspiration of the people.

For example, an excerpt from his tedious rejoinder, which succinctly captures this dislocated intellectual locus, reads thus: “No amount of propaganda, not even leveraging on the reputation of Bob Dee, can garnish a bad case… it is only fair that as a significant stakeholder in the development and politics of Rivers State, I am joining the patriotic endeavours of well-meaning Rivers State people to put the record straight. In doing so, I concede that in our highly politicized environment, falsehood ignored later starts looking like the truth, and with time facts become debatable. This, unfortunately, is not time for politics.”

Against the backdrop of the above therefore, it becomes imperative to properly locate Dakuku Peterside within the ambit of his present hibernation and the torpor that ultimately invokes misguided hubris on his suffocating inertia.

Unceremoniosly relieved from his recent unimpressive misadventure with NIMASA; a job for which he had little knowledge and zilch experience, but was appointed as compensation for his failed Governorship bid, Dakuku has been compelled to recline quite disconsolately to his recognized day job of Wike-bashing.

Charged with reluctant gusto and this time masquerading with the ambivalence of an omnibus self imposed title as “leadership and policy expert”, ostensibly crafted after several pedestrian appearances as a ‘Speaker’ at some makeshift conclaves during his short- lived stint at NIMASA, Dakuku’s pathetic appendage of the Amaechi Administration and pitiful lackey of the Transportation Minister, has once again been exhumed.

We do not wish to further glorify his attention seeking, garullous verbiage, especially now that we are also aware of the devious and frenetic jostling for appointment into the Niger Delta Development Commission(NDDC) substantive Board.

Suffice it to say that just as Chief Momodu has aptly observed in his response, Dakuku goofed in almost every paragraph of his bitter, acrimonious and conserted effort to undermine the amazing, determined and unstoppable zeal and dynamism with which Governor Wike is delivering legacy projects across the State.

It is indeed a shame that a ‘significant stakeholder’ and a ‘leadership and policy expert’ as Dakuku addresses himself in his verbose essay, is still appropriating projects meant for the welfare and wellbeing of Rivers people, to specific administrations, as though they were personal property.

Perhaps, he needs to be reminded that the railways which his mentor is gloatingly delivering were conceptualized and commenced with considerable work done on most of them by the previous Federal Administration.

The same goes for the second Niger Bridge, the rehabilitation of Airports and some of the far reaching reforms in the maritime sector. We are even embarrassed that Dakuku Peterside, who could not attract a single project or influence any meaningful value adding initiatives to the lives of his people in his many years as NIMASA Boss, can shamelessly reference the Andoni-Opobo-Nkoro Unity Road.

To even make such a pedestrian point that the Wike administration cannot complete the remaining 20 percent of the road in six years is laughable. After 150 years of existence as a Kingdom, his hometown, Opobo has been linked by road by Governor Wike.

It is even more surprising that despite the avalanche of information and authoritative clarifications in the public space about the refunds from the Federal Government, Dakuku Peterside, like a drunken analyst who has only just woken up from a delayed stupor, is only now adding his own misleading misinformation to the discussion, when the train had long left the station.

This is utterly ridiculous coming from a supposed scholar and so called ‘significant stakeholder’.

Like Chief Momodu rightly pointed out, Dakuku’s jaundiced perception of events in Rivers State, attests to the sad fact that he is no longer familiar or conversant with the reality on ground, which even distinguished members of his own party, APC have participated vigorously in, establishing the credibility of the amazing work Governor Wike is doing across Rivers State.

One needs not remind Dakuku Peterside that political psychophancy can oftentimes transform into reputational absurdity.

Indeed, Dakuku Peterside’s tirade resonates loudly in his warped translation that the curfews in Rivers State, most of which have also been necessitated by the horrendous failure of the Federal Government to stem the rife spillover insurgency and wide spread attacks by unknown forces in the land, as well as the COVID-19 lockdowns to enforce mandated protocols, aimed at curtailing community spread of the global pandemic in Rivers state, are examples of insecurity in the land.

One would not have been surprised if this was some beer parlour analysis by an inebriated critic but the fact that it is coming from a man of Dakuku’s so called scholarly disposition beggars belief. It would be a waste of time therefore to inform him that the spate of insecurity in states surrouding Rivers State has made it imperative and inevitable for Governor Wike to show bold, determined, focused and decisive leadership in order to protect and secure the lives and properties of Rivers indigenes and residents.

But perhaps, the most malevolent manifestation of jealousy and malicious angst echoes loudly and ruefully in the petty bitterness inherent in Dakuku Peterside’s conclusion, when he says: “I am aware that Governor Wike’s main signature project is the replica of the Government House that he has built for himself in his village…”. What else could be more churlish and infantile than this kind of dangerous covetousness which speaks ill of the good fortunes of one’s neighbor.

Ironically, while Dakuku Peterside is still wrapped up in the hypnosis of a past, riven with monumental failures, which he and his atrophied co-travellers have continuously attempted to repackage with half-truths, cover-ups, outright lies and distorted facts, Rivers people whose lives and communities Governor Wike had impacted and is impacting positively, have continued to shower uncensored enthusiastic and sincere encomiums on him, from Etche to Saakpenwa, Bori, Ikwerre, Kalabari and even from Dakuku’s own backyard in Opobo, when they celebrated the 150 years anniversary of Opobo kingdom.

We are however gratified in the knowledge that Governor Wike does not even have to engage in what Dakuku Peterside has so petulantly refered to as ‘pernicious propaganda’. His works in road infrastructure, healthcare, education, agriculture, human capital development and sports, speak for themselves in the 23 Local Government Areas.

Let us also notify Dakuku Peterside, that Governor Wike still has nearly two more years of his administration left and with the promise that he will impact every Local Government with legacy projects and will complete all projects he has embarked on, he has already written his name in gold in the annals of time. There is no amount of bellyaching or convoluted analysis that can alter that.

As a second term Governor, Wike is working as if it is his first tenure and Rivers people and the entire world are seeing and applauding him everyday.

Nsirim is the Commissioner for Information and Communications, Rivers State

Reasons most state Governors are against Local Government Financial Autonomy

The Essence of Humanity and Mrs Nkechi Ikpeazu’s Sterling Example… By...