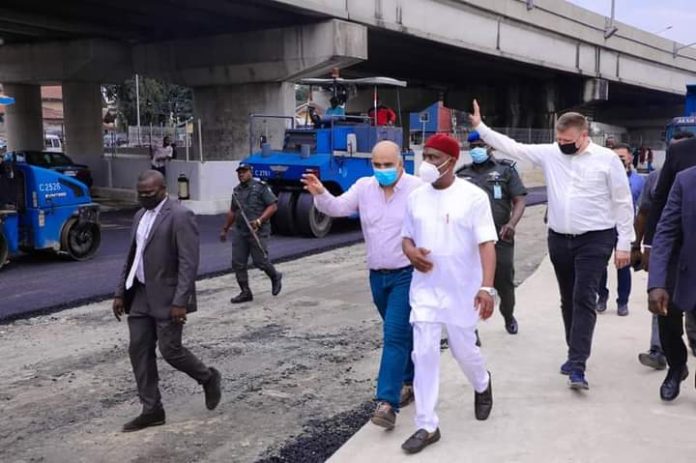 Governor of Rivers State, Nyesom Ezenwo Wike has reiterated commitment of his administration to work tirelessly in advancing the State and improve the quality of living of Rivers people.

Speaking to journalists during an unscheduled inspection of four ongoing flyover projects in Port Harcourt and Obio-Akpor Local Government Areas of the State, Governor Wike said more democratic dividends are in the offing for the people of the State.

The governor explained that his administration will continue to honour the social contract reached with Rivers’ people since 2015 to provide them good governance and quality infrastructure.

“For us, we owe them that duty to make sure that the mandate they’ve given to us will not be taken for granted. That is why all the members of our team are working, trying to make sure that we satisfy the yearnings of our people.”

The governor asserted that with commitment and passion, there is nothing any sincere government cannot accomplish in terms of providing basic infrastructure that can bring about the necessary transformation of the life of the people.

“It is very easy. The funds are there. When people ask us where do we get funds, we laugh. it is a matter of management, being prudent with the little you have. It is not as if we have a lot of money. The little we have , we have to manage it in a way that we can say, this is what we did with funds available to us.”

The Governor frowned at the operations of illegal parks and other illegal trading activities around the ongoing flyover projects.

According to him, such despicable activities do not speak of a well of the State that is investing huge resources to enhance the status of the State capital and improve commerce.

“We have taken a decision that we are going to barricade off, and stop operations of all the unnecessary motor parks that are springing up. We want to make sure that people know that they cannot just wake up in the morning and decide to take government space and use as your private park.”

Speaking further, Governor Wike stated that henceforth, any business place within whose precinct refuses are found, will be sealed up in the State. The decision, he said, is informed by the carefree attitude displayed by members of the public towards issues of sanitation.

According to him, if owners of business premises do not litter their premises and discourage others, the state will be cleaner.

Governor Wike said, his administration has the political will to implement the new order because, in the long run, it will result in a change of behaviour and increase the attention members of the public pay to issues of sanitation.

“Those at Aba Road axis of the Rumuola area will be the first victims. Thereafter, others will follow, so that people will know that government is very serious.

“So, all those who litter refuse, and operate motor parks will have themselves to blame. This is not the time people will tell you that the economy is hard. If the economy is hard, does it mean that you’ll sell your goods and litter the places with the refuse.

“Why do you have to litter the area, thinking that government will come and clean them up for you. No, nobody will do that any longer.”

The flyover projects inspected by the governor included the Rumuola, GRA junction, Orochiri/Wurukwo and Oru-Abali flyovers.