Home PUO NEWS We Won’t Have Performed Better Without Cooperation From Other Arms Of Govt... 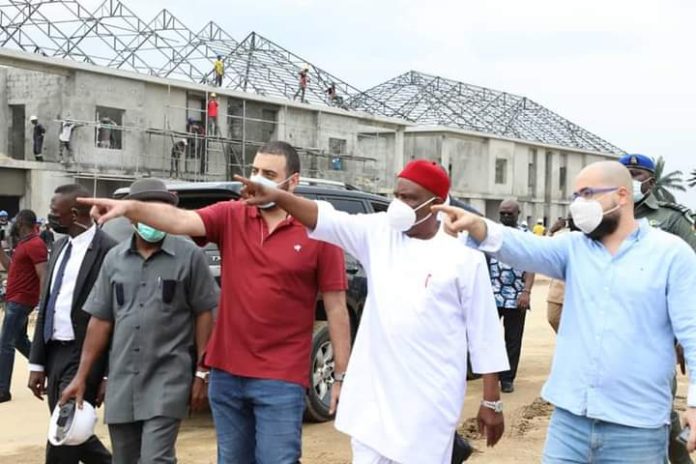 Governor of Rivers State, Nyesom Ezenwo Wike says the existing robust relationship between the three arms of government in the state is creating a very good environment for Rivers people to enjoy democratic dividend.

The governor made the assertion shortly after inspecting the progress of the ongoing civil construction work at the official residential quarters of lawmakers of the Rivers State House of Assembly in Port Harcourt on Friday.

Governor Wike said every arm of government in the State knows, understands and performs its role without interference. Such independence, he pointed out, has engendered a good work environment for each other to perform their duties.

“So, for us in the State, we believe in the autonomy of each of the arm of government. At the same time, we believe that working together for the interest of the state is better. Autonomy does not mean that each of government will begin to antagonise themselves.

“If they do that, then at the end of the day, it is the state that will lose. Working in harmony, independently and cooperatively, will bring a lot of benefits to the people.”

Governor Wike stated that it is the posture that has helped his administration to continue to deliver on its mandate, in terms of project delivery and provision of services, to Rivers’ people.

“Frankly speaking, it would have been difficult if we do not have a good, robust relationship between the three arms of government. Yes, we are independent but we work cooperatively to see that the state moves forward.

“If we have the relationship that is not good with the legislature, then how would they have passed the budget for the executive to implement?”

Speaking about the legislators’ quarters, Governor Wike stressed that the project is executed deliberately in order to provide the lawmakers and their families a befitting residence.

Governor Wike said his administration has already built similar facility for the judiciary with almost all the judicial officers in the state having their own accommodations.

“Having done that, we also felt, the second arm of government, which is the legislature should also have their own residence. It will be where they can put their heads together, their families can stay and have a good environment where they can work.

The governor, who expressed his delight over the quality of work done already by the contractor, Lubrik Construction Company, said he expects them to handover the completed project to State Government in December 2021 for commissioning by the Speaker of the House of Representatives, Rt. Hon. Femi Gbajabiamila.

Governor Wike , who was accompanied by Senator Lee Maeba and Senator Sam Anyanwu, explained that the legislature deserves the best because they represent the people directly.

According to him, the legislature is as important as the other arms of government, particularly because they do not conclude their work without having a direct input of the people before passing any law.

“You cannot say that for such arm of government that directly represents the people should not have a befitting accommodation.”

Governor Wike also noted the amount of jobs the project has provided for youths in the State.

The governor, who also spoke with the workers, encouraged them to be committed to their work and maintain cordial relationship with the management of the company.