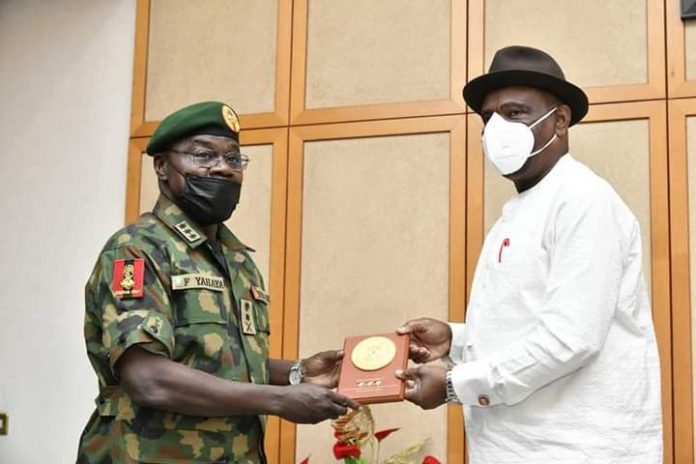 *says Nigeria must be protected against all forms of secessionist agitations

Governor of Rivers State, Nyesom Ezenwo Wike has urged the new Chief of Army Staff, Lt. Gen. Farouk Yahaya not to allow his officers abandon their professional duties and get involved in mainstream politics.

The governor gave the charge when he hosted the new Chief of Army Staff on a courtesy visit at Government House, Port Harcourt on Monday evening.

Governor Wike noted how the fight against insecurity has suffered set back because Army officers became partisan and could not stand on the side of professional practice because of their bias.

He recalled situation in Rivers State in when the Army turned the 6 Division into an election collation centre during the 2019 general elections in the state.

According to governor Wike, Rivers women also stopped the Army from rigging the 2019 General Election.

Governor Wike stated that his administration is always willing and ready to work with all the security agencies in the fight against criminality in Rivers State.

“I don’t understand why we cannot remove politics from our jobs. Let’s do our jobs and keep the country going. I can tell you that I’m willing and ready to work with all the security agencies, not only the army.

“The gun boats we are providing are almost ready. We have paid for everything. We will also provide vehicles. All I need is security of my people. I’m here to partner with you.

Governor Wike pointed out that banditry, kidnapping and agitations are different dimensions of crimes that have put Nigeria in dire situation.

According to Governor Wike, while no form of criminality should be condoned, those agitating against perceived injustice and seeking to address their grievances, should not also adopt violence.

The governor restated his belief in the unity of Nigeria, because it is God who has put the different people together and such decision cannot be a mistake.

“There must be differences. There must be anger. It is for us to sit down to discuss it. I have said generally that I am not against anybody agitating for whatever you want to agitate. My take is that you cannot be violent.

“So if anybody says they’re agitating, I have no problem. But don’t agitate to say I’m part of you. No, don’t do that. I am the Governor of Rivers State, with all due respect. I must make sure the territory called Rivers State must not be taken away by anybody or group of people. It is my responsibility to protect it.

“I believe in the unity of this country. I believe that God did not make mistake to say there should be a country called Nigeria.”

Speaking further, Governor Wike explained that his administration is ridding the state of shanties that have served as criminal hideouts for hoodlums who are disturbing the peace of the state.

The governor said the action is not targeted at any group of persons and urged them to stop reading ethnic or religious coloration into government’s action.

Governor Wike commended the new Chief of Army Staff for the proactive measures taken since he assumed duties to address the threats that have challenged the sovereignty of the country.

The Governor noted that the challenges will be enormous, but if the current tempo is sustained and also improved upon, the desired success will be achieved.

“You should continue to maintain integrity, that respect for the Nigerian Army. It is very important. Even if you leave office today, you can say that while I was Chief of Army Staff, I maintained that the integrity of the Army must be protected at all times.”

In his speech, the Chief of Army Staff, Lt. Gen. Farouk Yahaya, said he was in Port Harcourt on an operation visit to 6 Division of Nigerian Army, having just assumed command of the Nigeria Army recently.

According to him, he is also using his visit to officially open the Combat Support Training Week and has invited the governor to be their Special Guest of Honour.

“It is usual to go round formations and units under the command to see on the ground the troops, interact, and assess their readiness including their achievements and challenges.

“In doing that, it is also usual to pay respect and courtesy on the governor of the state. I want to appreciate you, having received brief from the Nigerian Officer Commanding on all the supports that you have been providing for the Nigerian Army, indeed the military, in Rivers state.”

2019: South-East leaders endorse Buhari for second term, beg him to...