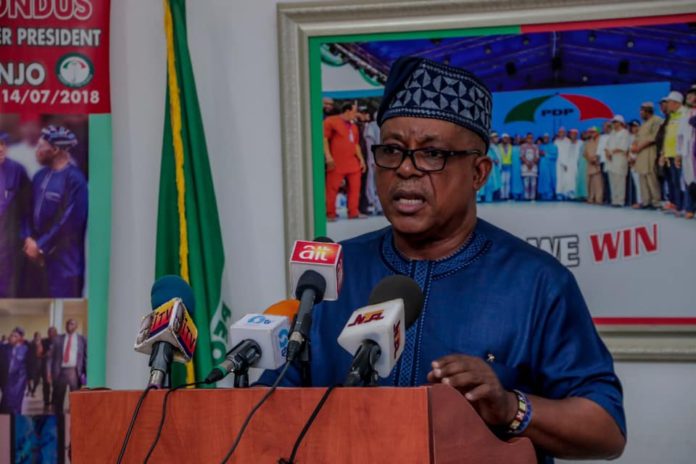 National Chairman of the Peoples Democratic Party (PDP), Prince Uche Secondus, has alleged that a certain party leader from the South-South who he described as “Father Christmas” is using cash gifts to lure party stakeholders in an attempt to hijack its structure.

He also alleged that the said chieftain is using all manner of resources at his disposal in an attempt to sabotage the party, and replace him and his executives with a caretaker committee.

Secondus’ lamentations come about 48 hours after wife of former Vice President, Atiku Abubakar, raised a similar alarm that a certain influential PDP governor in the South-South had paid certain party officials N25 million each to help get rid of the Uche Secondus led executive.

In a statement made available to City News and titled: “Who is after Secondus and Why is Somebody in the Love of Caretaker?” issued by Secondus’ spokesman Ike Abonyi on Wednesday, the party national chairman stated: “Answers to the above posers will help members of the public to decipher the recent disquiet in the Peoples Democratic Party (PDP) and why few months to the national convention of the party, somebody is routing for a caretaker committee to run the affairs of the party.

“The media office of the national chairman is privy to intelligence that the strong party chieftain, who is bent on hijacking the party structure for destruction, is still on the loose with the main agenda of denting the image of Prince Uche Secondus, the National Chairman.

“Reports reaching this office shows clearly that this character is deploying all devious means to try and diminish the person and character of the national chairman with a view to having his way [at] ultimately hijacking the structure for his disproportionately large ambition.”

“We, therefore, wish to alert the general public particularly media houses and party stakeholders to look out for strange deployment of luring gifts from this destructive ‘Father Christmas’ all aimed at having a grip on the soul of our party by having a caretaker committee.

“What continues to shock many party observers is the real reason behind the desperation of this man to get at the national chairman and the quantum of public funds being expended to achieve this illicit goal a few months to the national convention.

“Few months to national convention anybody who means well for this party and who is a true democrat should respect the constitution of the party and approach issues dispassionately.

“Prince Secondus through the media office, however, wishes to assure all critical stakeholders of our great party that every reasonable step is being taken to ensure that the image and status of the party is not injured by all these needless noise and scheming by desperadoes.”