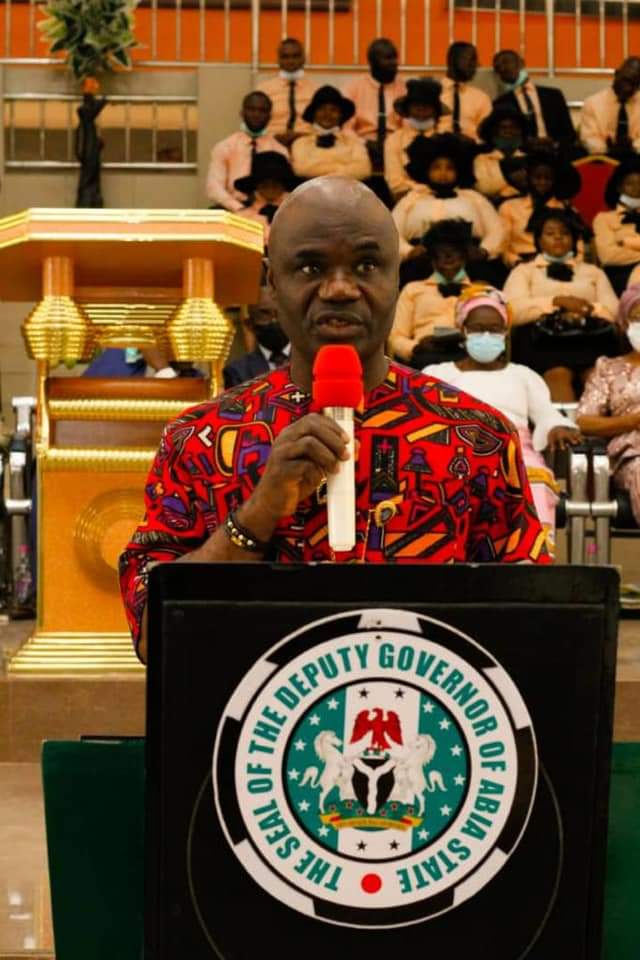 Speaking at the Special Thanksgiving Service, the State Governor, Dr Okezie Ikpeazu reaffirmed the determination of his administration to transform the infrastructural architecture of Umuahia, Aba and environs to one of the best among the comity of States.

The Governor represented by his Deputy, Sir Ude Oko Chukwu, thanked God for his faithfulness and mercies over the years, especially during the dreaded years that kidnapping and other criminalities made the State to be deserted by prominent businessmen and women as well as discouraged investors to abandon the State and stall development. He stressed that God’s faithfulness also saw the State through the ravaging effects of COVID-19, End SARS protests, violent disturbances including the Unknown Gunmen phenomenon among other things, and urged the Church not to relent in their prayers for the State.

The Governor also lauded Abia founding fathers for their efforts that led to the creation of the State and assured that his administration will not relent in taking the State to greater heights.

In his sermon titled, “Great Is Thy Faithfulness”, the President, Eastern Niger Union Conference, Pastor Bassey Udoh noted that God’s Faithfulness and Mercy has kept the State intact and peaceful these past 30 years despite the ravaging effects of COVID-19, insecurity and other issues including the harsh economic realities that have turned many other states and countries into flashpoints of horrible stories.

Pastor Udoh who used the Service to extol the Governor Okezie lkpeazu-led administration for governing with the fear of God by touching all the nooks and crannies of the State with developmental projects, prayed God to continue to bless Abia to remain one of the best and most peaceful states in the country.

The Thanksgiving Service which featured special prayers for the Dr Okezie lkpeazu’s government as well as for the continued peace and progress of the State attracted the presence of the Wife of the Governor, Mrs Nkechi lkpeazu, top government officials, Local Government Chairmen, Elder Statesmen, Traditional Rulers and other distinguished personalities.

To Say Buhari’s Govt Is A Complete Failure Is False, Says Adesina

Ikpeazu: Why S/E govs are handicapped over IPoB’s sit-at-home order

Only God can take my life – Tinubu