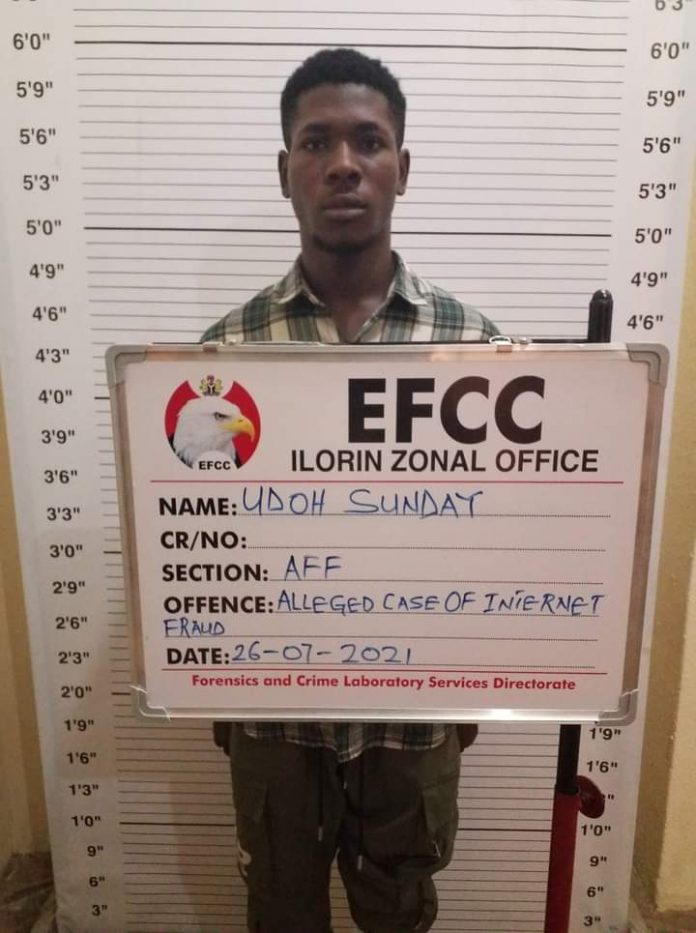 The Ilorin Zonal Command of the Economic and Financial Crimes Commission, EFCC, on Wednesday, August 25, 2021 secured the conviction of one Udoh Sunday Okon for offences bordering on Facebook lottery scam.

Udoh, an undergraduate, allegedly defrauded an American, Kimberly, to the tune of $500USD via Facebook lottery.

The 20-year-old Akwa Ibom indigene was prosecuted on one-count charge, to which he pleaded guilty.

The charge reads: “That you, Udoh Sunday Okon (Christopher Wray) sometime in March 2021 at Ilorin, within the jurisdiction of this Honourable Court did cheat by personation when you pretended to be one Christopher Wray a white male with +18315088635 as your WhatsApp business line and fraudulently deceived Kimberly, an American, to send $500.00 ( Five Hundred United States Dollars) worth of Ebay gift card to you after you made him believe that he won $1,000,000.00 (One Million Dollars) Facebook Lottery and you thereby committed an offence contrary to Section 321 of the Penal Code and punishable under Section 324 of the Penal Code.”

Following his plea, Sesan Ola, counsel to the EFCC, urged the court to convict the defendant and sentence him based on his plea and the evidence tendered before the court.

Justice Sikiru Oyinloye of the Kwara State High Court, Ilorin pronounced the defendant guilty of the offence and sentenced him to a term of one year in prison.

The judge, however, gave the convict an option of fine of N200, 000 (Two Hundred Thousand Naira Only).

In addition, the court ordered the forfeiture of N206, 000 draft raised as restitution by the convict and the iPhone which he used in perpetrating the crime to the Federal Government.

To Say Buhari’s Govt Is A Complete Failure Is False, Says Adesina

Ikpeazu: Why S/E govs are handicapped over IPoB’s sit-at-home order

Only God can take my life – Tinubu

Fani-Kayode’s Claim On My Defection To APC An Insult On My...

Stop Lying In The Name Of The President – NYCN Warns