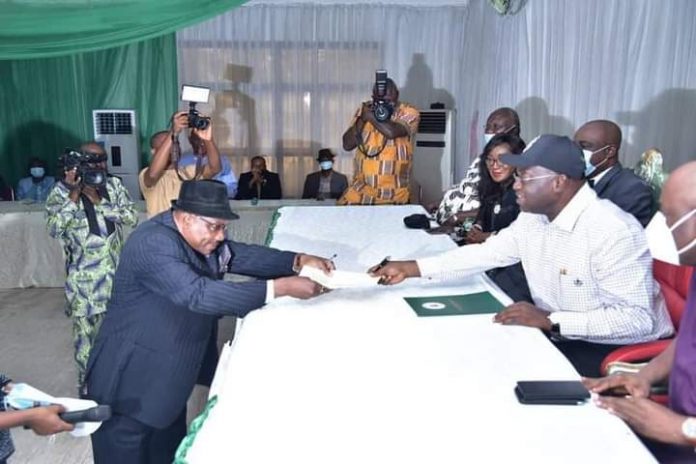 Governor Okezie Ikpeazu has sworn in The Honorable Justice Okey Iyke Nwamuo as the Acting President of the Abia State Customary Court of Appeal with a charge for him to give immediate attention to the general state of Customary Courts in Abia State.

Speaking after the Oaths of Office and Allegiance were administered on the Acting President of the State Customary Court of Appeal, by the State Solicitor General, Lady Uzoamaka Ikonne at the Government House, Umuahia, Governor Ikpeazu reminded members of the Judiciary that they play indispensable roles in stabilizing our democracy and defending the voiceless in the society.

The Governor said that the duties of the judiciary in justice dispensation system in the State cannot be overemphasized and urged the Acting President of the Customary Court of Appeal to contribute his quota in the development of the State.

He thanked the immediate past President of the Customary Court of Appeal, Hon. Justice SMC Ururuka Onyenso for her contributions to the growth of a robust Customary Court system as well as the judiciary as a whole for its support to his administration, despite the fact that her tenure was short.

In his acceptance speech, the Acting President of the Abia State Customary Court of Appeal, Honorable Justice Okey Iyke Nwamuo thanked the Governor for the honour done him.

The appointment and swearing in of the Acting President of the Abia State Customary Court of Appeal followed the retirement of Hon. Justice Stella Maris Chinedum Ururuka Onyenso upon the attainment of the mandatory retirement age of 65 years, two days ago.