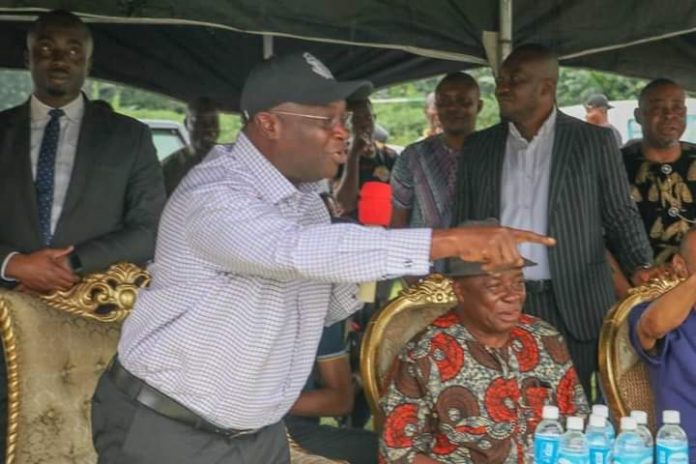 Governor Okezie Ikpeazu has restated his proud membership of the Peoples Democratic Party (PDP), saying that it remains the party of choice for our people.

The Governor also stressed the need for the strengthening of PDP in various wards in the LGAs of the State saying that no politician excels without the political wards.

Governor Ikpeazu was speaking while hosting the PDP Ward Meeting of Obingwa Ward 7, his immediate Ward, at Umuobiakwa Village. He said anyone who excels in politics must be approved of and supported by his political ward and urged the stakeholders to always hold the party ward meetings at regular intervals.

The Governor who stated that there was need for the party members at the ward level to reorganize themselves and get fortified at polling unit levels. He also tasked party leaders at the Ward levels to ensure that democracy takes solid roots at the polling Units, especially now that the registration of voters has commended again, urging all eligible voters who are yet to register to do so immediately.

Also speaking, the PDP Stakeholders’ Chairman
of the Ward, Chief Rowland Nwakanma and Chief Isaac Ogbonna thanked the Governor for hosting the Ward meeting and commended him for his giant strides in the State. They assured they would sustain the monthly meeting as the meeting would strengthen the party in the ward while calling on all to ensure they get registered in the ongoing INEC Online Registration Excercise.
Chief Nwakanma promised to host the next meeting of the Ward.

Earlier, the PDP Ward Chairman of Obingwa Ward 7, Mr. Ahamefula Egbulefu said the meeting was important to strengthen the party in the ward. He said the party is making frantic efforts in encouraging people register in the INEC registration excercise to ensure the numerical strength of the ward is boosted and appreciated the Governor for kickstarting the hosting of the Ward meetings.

Chief Victor Ebere, the State PDP Organizing Secretary who is also from the Ward was also part of the meeting.

Buhari To Igbo Leaders: Your Demand For Nnamdi Kanu’s Release Is...