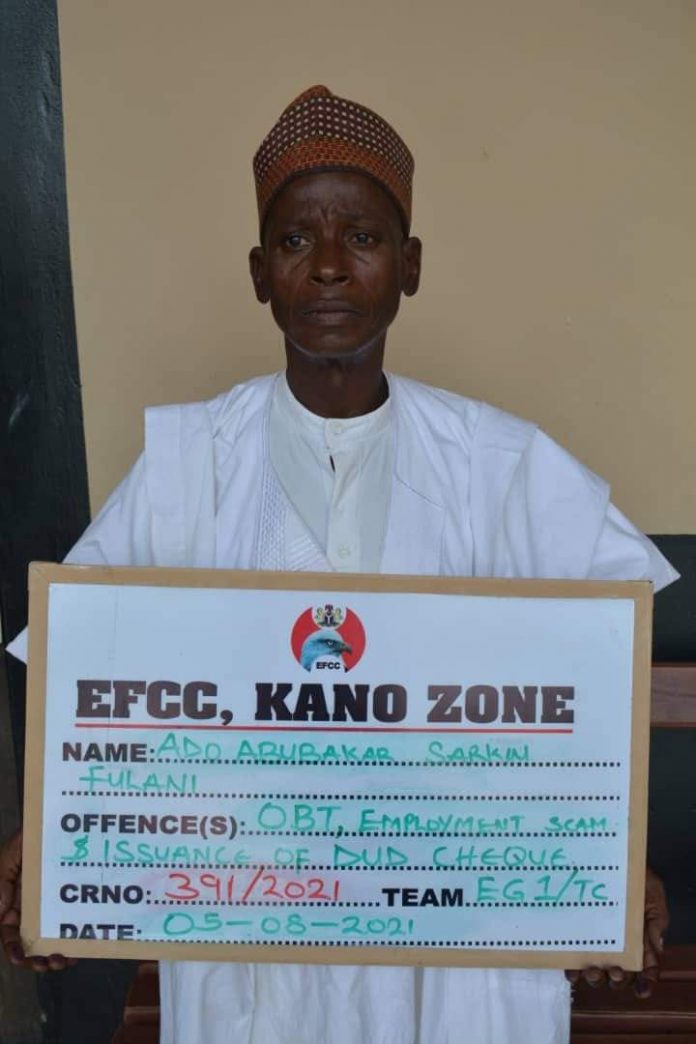 Justice Sanusi Ado Maaji of the Kano State High Court today August 30, 2021 convicted and sentenced one Ado Abubakar Sarkin Fulani to seven years imprisonment on a count charge of obtaining by false pretense. He allegedly induced one Ibrahim Balanti to make payment into his account by promising to get him enlisted into the Nigeria Customs Service. He claimed that he had a customs officer friend by name, ACG Ahmad Jibrin, who was purportedly given slots to fill at the Service.

When the job offer was not forthcoming, he realized that he had been duped and demanded a refund of his money to no avail.

The charge read that, “you Ado Abubakar S Fulani sometimes in January, 2021 at Kano within the jurisdiction of this Honourrable Court with intent to defraud did obtain the sum of N330,000.00(Three Hundred and Thirty Thousand Naira Only) from Muhammad Balanti Adam, which money you caused to be paid into your First City Monument Bank account number 6491929010 under the false pretence that you will secure an offer of appointment for him with the Nigeria Customs Service contrary to section 1 (1)(a) of the Advance Fee Fraud and Other Fraud Related Offences Act, 2006 and punishable under section 1 (3) of the same Act.”

The defendant pleaded guilty to the one count charge.

In view of his guilty plea, prosecution counsel Salihu Sani asked the court to convict him accordingly.

Justice Maaji convicted and sentenced the convict to (7) Seven years imprisonment without option of fine.

The convict was also ordered to restitute the sum of N330, 000 (Three and Thirty Thousand Naira Only) to the nominal complainant.