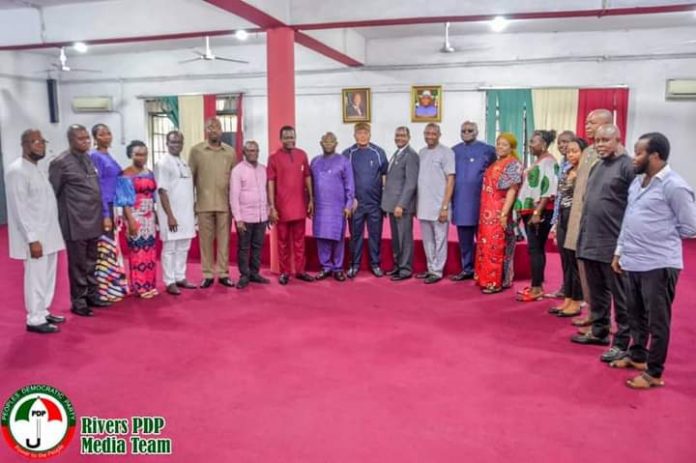 The leadership of the Peoples Democratic Party (PDP) Andoni Local Government Area, paid a solidarity visit to the State Secretariat of the Party to reaffirm the suspension of the erstwhile National Chairman of the party, Prince Uche Secondus.

The high powered delegation led by the Speaker of Rivers State House of Assembly, Rt. Hon. Ikuinyi Awaji Ibani, who spoke on behalf of the delegation, stated:
“As a people, we know that the name Andoni is synonymous with PDP. We acknowledge the fact that right from the formative stage of the PDP in 1998, up till this day even as I stand here to speak, that Andoni is PDP and PDP is Andoni.
Therefore, the leaders deem it necessary to pay this solidarity visit,” he added.

Rt. Hon. Awaji Ibani commended the Chairman of the party, His Excellency, Ambassador Desmond Akawor for steering the party aright.
He added that they’re not compelled to show the solidarity, but do so out of their own volition, because of the extraordinary leadership, shown by the administration of His Excellency, Chief Barr. Nyesom Ezenwo Wike and that is where the interest of all Andoni sons and daughters lie.
“We want to State and Categorically clear, that when you throw up your child to your community to be coronated as a king, there is no way as a father or mother, you can now begin to address that child as a first name, because you have given that child to the community to be coronated a King. As Andoni people, we know the tradition. Our interest is the interest of the party and the leader of the party in the state, His Excellency, Nyesom Ezenwo Wike.
As a people we have come to show our support to the party and the state. We are good politicians and we know what it means to be members of a political party. As Andoni people we are here to show our support to the party and the state and we will continue to pledge our unalloyed support to the party and the state. We also assure the party, that right from the beginning Andoni has always delivered massive votes for the party and will continue to do that,” he reiterated.

The delegation stated that they stand by the decision of the party based in the mechanisms put in place to resolve any issues it has internally.
Rr. Hon. Ikunyi Awaji Ibani, stated that, “We have been hearing hearing we have been seeing, we know that our own father, our own son is the National chairman of the Peoples Democratic Party, and we know that that position came to Andoni because it was zoned to the state as at the period, and that was the interest of the state as at that time. And if the interest, the cooperate interest of the state has changed, as Andoni people, we still believe that as a sub system that joined other sub systems to join the cooperate interest of the state, the absolute interest the state has over and above other sub interest, which is the main issue that we have laid out as it concerns this solidarity visit. We are to say any decision taken by the party in the state, in conjunction with the leadership of the party, as Andoni PDP, we stand by that decision, and that is why we are here today.
Because in this state, PDP has always been one and as Andoni people we don’t want to be left behind,” he added.

He said the people will continue to support the leadership of the state to ensure there is success at all levels in the party and the state, adding that the unity of the LGA and the party is sacrosanct.

“The one that broke the camel’s back was when the pioneer chairman of the APC came back to our party and said he has seen the lies of the APC and had come back to his home, which is PDP. He was received with heavy ovation by the Governor of Rivers State, the leader of the party in the state openly. Only to get the news that the reception in Andoni is not uncomfortable, that the National chairman has not given him serious comfort since he came back to the party and we felt that it was very bad. Leaders spoke to him that we are growing a family. Rather, press war was now waged on the leader of the party, His Excellency, Nyesom Ezenwo Wike. At the National, music started changing, that our own son now, was seen as somebody whose management, structure had become so dangerous that our party was heading for a rock and that 2023 movement won’t be comfortable again for PDP and of course at some there was crisis,” Ambassador Akawor stated.

He noted that the only way to salvage the party were the steps taken, after several meetings had been called to resolve the issues to no avail. He said emissaries were sent to the former National Chairman, Prince Uche Secondus to rectify what was happening but returned disappointed. The party became divided across all levels due to the mistakes he made and that was why there was need to take the steps in the best interest of the party, to go to court.
He expressed disappointment at the level at which Rivers State and the leader of the party in the state, His Excellency, Nyesom Ezenwo Wike became a laughing stock with people insulting the. The NEC had to step in, along with the National Chairman to ensure that the party comes out stronger.
He stated that plans are currently underway with committees set up for the upcoming National Convention.
He thanked the people of Andoni for throwing their weight behind the party and assured them that the party will triumph and come out thronged amidst the recent challenges it faced. He said the Governor will be notified of the visit, as it is a move to restore the party in the LGA, guaranteeing them that all will be well and no intimidation will be tolerated from the aggrieved parties.
He said politics is different from traditional issues and therefore, they should be rest assured that their interest will be protected, stating that all will be forgiven if the steps of the erstwhile National Chairman are retraced. He added that the success of the party come 2023 is without a doubt as the right moves are being made to ensure the PDP emerges victorious at all levels.

Ikpeazu Assures Abians Of a Positive 2019 in New Year Broadcast