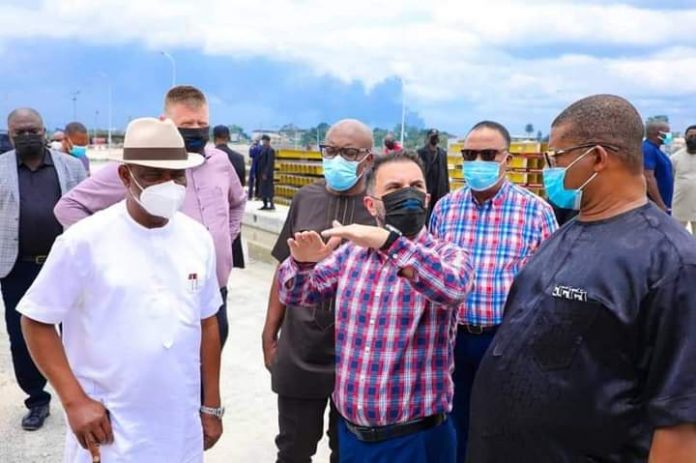 Governor of Rivers State, Gov Nyesom Ezenwo Wike – CON says that the Dr. Peter Odili Cancer and Cardiovascular Disease Diagnostic and Treatment Centre in the State was conceived as a response to save the life of Rivers people and other Nigerians.

The governor explained how sad it is to see so many people dying because they do not know that they have cancer or heart related diseases, and cannot also afford the cost of going abroad to seek adequate medical attention.

Governor Wike gave the explanation on Tuesday shortly after inspecting the progress of work done at the health facility at Rumuokwuta Town and the sand-filled area located in Ogbum-nu-abali Town in Rivers State.

The governor stated that with such health facility in Rivers state, those who suspect that they have cancer ailment or heart related diseases can diagnose it on time.

According to Governor Wike, experts in such field will also be attracted to the centre to support the staff strength to offer the best medial attention to Rivers people and Nigerians.

“So to us, it will act as a medical tourism. It will earn foreign currency for us. People will come from outside Nigeria. Just like we travel overseas all the time.

“For example, see the facility that we have at the Government House Clinic today. That has reduced the level of people traveling overseas. Look at me, I’ve not traveled since 2019 because we have the best equipment that will be able to take care of whatever that is diagnosed.

“The Dr. Peter Odili Cancer and Cardiovascular Disease Diagnostic and Treatment Centre will reduce the time our people spend going overseas to spend money. Again, it will reduce the level of death as regard to this problem of cancer and heart diseases.”

The governor also explained that because of the importance attached to the project, 70 percent of the contract sum had already been paid to the contractor, Julius Berger, and assured that the remaining funding will not be a problem.

Governor Wike expressed the optimism that the project will be completed by July 2022 given the commitment already demonstrated by the contractor.

“It’ll be the first of its kind in Nigeria, if not in sub-Sahara Africa. Again, it is to give our people the best in terms of health care system. We are quite happy with what we are giving to our people.”

Speaking further, Governor Wike said politics is beyond political meetings. According to him, it also includes governance in which there is an effective monitoring of activities and projects to ensure that promises made to the people are fulfilled.

Speaking about 16 hectares of land that was dredged at the Ogbum-nu-Abali Town, Governor Wike said the area will be developed into a modern city with all the trappings that will make living pleasurable.

According to Governor Wike, that place that was once a mangrove swamp and robbers’ den is undergoing transformation and Julius Berger Nigeria PLC has been contracted to do land mapping to mark out the utility lines, and lay asphalt on the 2.5km road network.

Biafra: You are not God – Amaechi attacks Buhari