The Elders and Stakeholders of the People’s Democratic Party (PDP) from Abia North Senatorial District of Abia State has maintained the zone’s quest for the Governorship seat of Abia Ahead of the 2023 Governorship Election in the State.

The Elders arrising from a meeting held at Ohafia, the Zonal headquarters of Abia North, said the zone was not interested in any office at the National Working Committee of the People’s Democratic Party (PDP) as the party holds her National Congress this coming October 2021.

The Elders and Stakeholders in the Release asked the Party leaders to resist the temptations of yeilding to the ambition of some individuals against the overriding interest of the vast majority of Abia North Stakeholders.

Here is the Statement.

A COMMUNIQUE BY ELDERS AND STAKEHOLDERS OF PEOPLE’S DEMOCRATIC PARTY ABIA NORTH IN ABIA STATE ON THE FORTH COMING PDP NATIONAL CONVENTION AND THEIR BID FOR ABIA GOVERNORSHIP BY 2023.

We, the Elders and Stakeholders of People’s Democratic Party Abia North in Abia State, Comprising of; Arochukwu, Bende, Isuikwuato, Ohafia and Umunneochi Local Government Areas, met on Friday 3rd September, 2021 in Ohafia the zonal Headquarters of Abia North and extensively deliberated on the burning national issues of our dear party vis-a-vis the Abia North Senatorial district in Abia State politics and we resolved as follows;

We associate ourselves with the resolution of the party to hold her national convention in Abuja on the 30th and 31st October, 2021; we also support every other mechanism put in place to actualize that and to further resolve whatever skirmishes that was orchestrated to throw our party into unnecessary crises.

That for all intents and purposes, we reaffirm our believe and confidence in the zoning of National Offices of our party across the geopolitical zones of the federation but wish to unequivocally disassociate ourselves from any effort or attempt by our party members from Abia North Senatorial District, to aspire or put themselves forward to hold any national office/position in the party by whatever name so called.

That the interest of the people of Abia North for the governorship of Abia State come 2023, is irrevocable, sacrosanct and cannot be sacrificed on the altar of any political offer whatsoever. We deem any offer for a position in the National Working Committee of our party as a Greek gift; very diversionary and a ploy to subvert the desire of Abia North from their political patrimony by 2023.

That we hold strongly to the principles of fairness, Justice and zoning System in government position/ political office/ party office and that Abia North having served the party as the National Secretary through Chief Ojo Maduekwe of blessed memory (July 2007 – March 2010), is not justified for any reason to canvass or contest for any national office, especially at National Working Committee level (at least for now) until other zones in Abia State must have had the privilege to serve the party at the level.

That we are privy to the fact that some of us from Abia North are lobbying, canvassing and making clandestine efforts and overtures to be elected as members of the National Working Committee of our great party in the forth coming National Convention. To this extent, we make bold to say that such equity, fairness, and good conscience which is the hallmark of the Abia Charter of Equity and what preach as compatriots and major stakeholders of Abia State politics.

We view such individuals from Abia North and their allies canvassing to be elected as members of the National Working Committee of our great party by October 2021, as pursuing self-serving interest at the detriment of the age long aspiration of the people of Abia North Senatorial District and against the collective interest of our party in our state. That this aspiration is not only selfish and greedy but is also against the collective interest, wish, desire and choice of Abia North Senatorial Zone.

Our party leaders nationwide should resist the temptation of yielding to the ambition of these individuals, against the overriding interest of justice, our people and the entire PDP family in Abia State. It is only when our quest for Abia governorship come 2023 is realized, that justice would be said to have been served in that regard for the best interest of the party.
That we wholeheartedly support the zoning of such office to any other Senatorial District in Abia State, to drive home our campaign for equity, fairness and good conscience in the politics of Abia State.

Finally, we reaffirm our confidence in all leaders and remain resolute in our conviction that come 2023 our party; the People’s Democratic Party will bounce back at the national level, to salvage our country from total collapse. 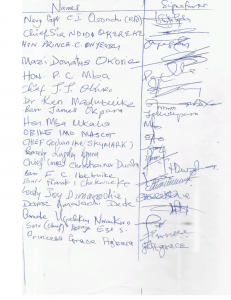 Ihedioha’s Address on the 40th Anniversary Of AHIAJOKU Lecture SERIES