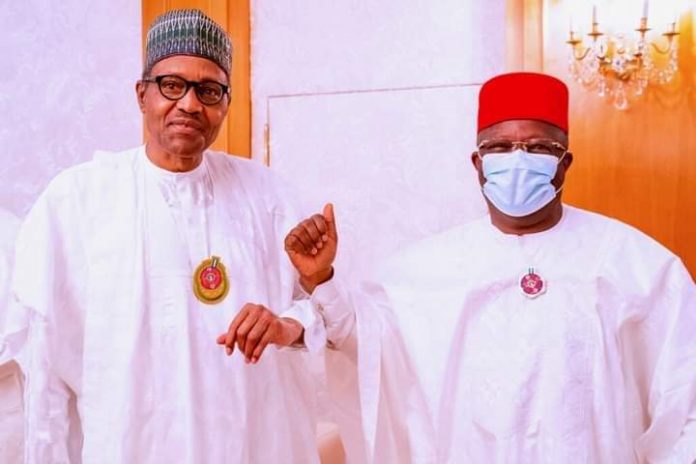 Governor Dave Umahi of Ebonyi state on Friday said that he will feel very bad if his party, the ruling All Progressives Congress (APC) denies the South-East the opportunity of producing President Muhammadu Buhari’s successor in 2023.
Umahi who dumped the Peoples Democratic Party (PDP) for the APC in November 2020 stated this while featuring as a guest on ‘Politics Today’ a programme on Channels Television, monitored by DAILY INDEPENDENT.

According to him, it is the desire of all Igbo people that both the APC and PDP should give the South-East a chance of producing the president in 2023 in order to ensure justice, equity and fairness,

His words “ The heartbeat of the people of the SouthEast is that they should be given a chance whether in PDP or APC for the presidency of this country for reason of equity, fairness and justice”.

“ If I follow APC for this length of time and they don’t give South-East an opportunity, I will feel bad. I will feel bad but what I will do if I stayed this length of time like I stayed in PDP and that happened, I wouldn’t be able to change. It depends on what God places in my mind. But I feel strongly that the future of this country is in the hand of God and what pleases God He will do”.

“Remember, when I joined APC, I did not join APC because I needed to insist that South-East must be the next president. I never did”.

“ I joined APC with all my heart and the support of Mr. President and in appreciation of all his support even when I was in the other party and also to prove that Igbo man believe so much in one Nigeria. That is the reason why I joined APC, apart from my protest of injustice meted to South East in PDP”.

Road To 2023: PDP Thrown Open Its Presidential Ticket To All Zones

2019: Wike difficult for APC to beat in Rivers – Aregbesola