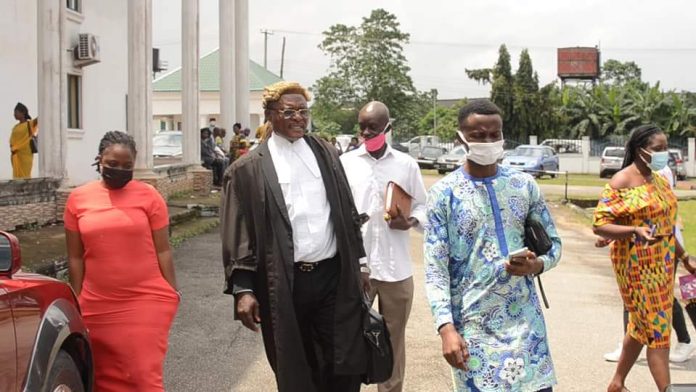 The Vacation High Court sitting in Umuahia, the Abia State capital had adjourned the ₦20m lawsuit against the Economic and Financial Crimes Commission EFCC, by an Umuahia based Journalist Norah Okafor to the 18th of October 2021.

While Adjourning the matter, the Presiding Judge, Hon. Justice Kelechi Okereke observed that the matter which would be transferred to a regular court as he may not likely continue to preside over the ligation at the next adjourned date owing to the fact that vacation court would expire on midnight of 30th Sept 2021.

The EFCC were however, absent when the matter was mentioned as they were not represented by any counsel.

Recall that Norah Okafor had sued operatives of the EFCC to court demanding ₦20million and public apology for encroaching into her apartment at the wee hours of 21st Sept ,subjected her and occupants of her building to inhuman treatment thus violating her fundamental human rights.

Speaking to Newsmen, Counsel to the Applicant, Hagler Okorie while giving insight on the matter said, “We approached the court for them to interpret whether the actions of the operatives were inline with their legal mandate as given by the EFCC act.

“Of course, we humbly viewed their actions as unlawful and unconstitutional and we also want the court to interprete that and award compensation on damages and offer public apology to our client.

“We are asking the court to make a determination whether a Federal agency that is created by law should invade a private citizen’s house without authorization done by the law. Of course, that law is that they ought to have had a warrant.

“They should have invited out client. Assuming our client refused the invitation, of course when that happens, they ought to have also gone back to a court to get a warrant of arrest or warrant of search which none happened in this instance so having done that, they have breached relevant sections of the constitution which grants a private citizen rights to privacy, family life, personal dignity and liberty so our client is entitled to compensation and public apology”.

On the absence of the EFCC at the court, Okorie acknowledged that the court through the baliff served the EFCC application of notice which they ought to respond within five days.

“I think they want to enjoy the luxury of that five days, that is what i believe talking as a lawyer but the matter has been adjourned. We expect that they will put up appearance on the adjourned date, but if they don’t appear, it means they have conceded to all that we averred in our application and the court will go ahead to give us judgement”.

Nigerians Who Have More Than N5,000 Account Balance Won’t Get Palliatives,...