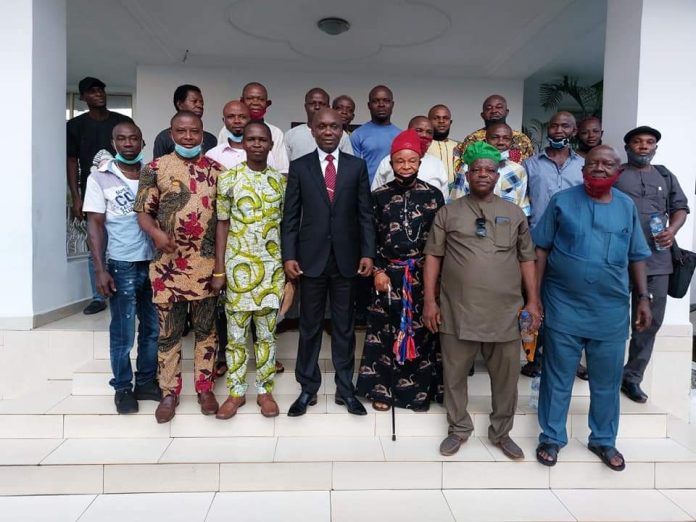 In an address presented by Chief Benard Nwosu the Chairman of Umuajiji Development Union, he said it was with great joy that the people of Umuajiji Isieke Ibeku in Umuahia North Local Government Area came to thank the Speaker for the numerous projects he has embarked on in their community.

“We are here to appreciate you in a special way for choosing to site a mini stadium in our immediate community and others scattered across the State. We believe when completed, the project will serve as a rendezvous for sporting activities not only to our immediate environment but to Abians in general”, Chief Nwosu stated.

The Chairman also told the Speaker some of the challenges the community still face like their faulty electricity transformer and pleaded with the Speaker to assist them fix the issue.

Responding, the Speaker thanked the delegates for coming on the courtesy visit.

He described Ibeku as “our heritage and we should put in our best to protect and defend this entity by living in peace with one another.

“Let go of every grievance and shun politics of bitterness. I embarked on this visible projects in your community because I owe you people a responsibility to lift and affect lives positively and I will hand over the mini stadium to your community after construction”, he said.

The Speaker further advised them to embrace peace and shun backbiting and forge ahead in unity and strength.

In his vote of thanks, Saint Kingsley Chimkwem thanked the Speaker for his kind words, promised that the community will heed all his advice, and prayed that God will continue to bless and keep the Speaker.

Comrade Ihemeremadu further said the Speaker has done noble and deserved huge commendation. He equally thanked him for the positive synergy that exists between him and the Governor.

The youth president of the community, Comrade Christian Onwukwe Ulonnam in his address said they came to identify with the Speaker for his good works which have manifested in the lives of the youths of his community.

Finally, the youth president promised that they would fully support the Speaker in his future political endeavours, and prayed God to continue to bless him abundantly.

Responding, the Speaker thanked them for coming to see him because he had long expected such visit because peace is supreme.

The Speaker also promised that the electricity issue in the community will be resolved in the next few weeks.

In his vote of thanks, Mr Benjamin Apugo thanked the Speaker for his good works and promised that the people of Nkata Afaratna Ibeku are solidly behind him.

Covid-19: Okowa Announces The Closure Of Night Clubs, Cinemas, Others