Home PUO NEWS I Was Sharing Bread To The Hungry, Nollywood Actor Speaks From Custody 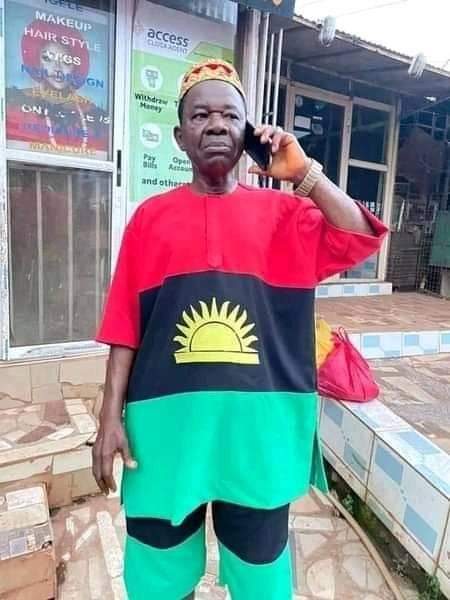 Nollywood actor, Chinwetalu Agu, has denied campaigning for the Indigenous People of Biafra (IPOB) and the Eastern Security Network (ESN).

The actor was arrested by soldiers in Onitsha, Anambra State, on Wednesday.

He was dressed in a Biafra attire at the time of his arrest.

In a trending video, the actor was seen seated on the floor, explaining that the outfit that he wore did not show that he was promoting the cause of IPOB or ESN.

He said, “I can wear this,” he said pointing to his outfit.

“This is rising sun, not Biafran, not Eastern Security Network, Do you understand? With my education, I know areas to go and areas not to go. It’s better for you to be videoing all this. Let’s listen to the facts and know how to react to the facts. This is a civil dress!

“I was buying bread, ten thousand naira worth of bread! And sharing it one by one, no campaign, no nothing, when they came, nobody was doing demonstration or carrying placard.

People who were hungry, I was giving them bread. Is it wrong to feed people?”

There has been mixed reaction to his arrest. While some accused him of boosting the morale of IPOB which is on an offensive in the South East, others said he had the right to be dressed in such manner.

The army authorities have denied that the actor was manhandled.

In a statement on Thursday, Onyema Nwachukwu, army spokesman.