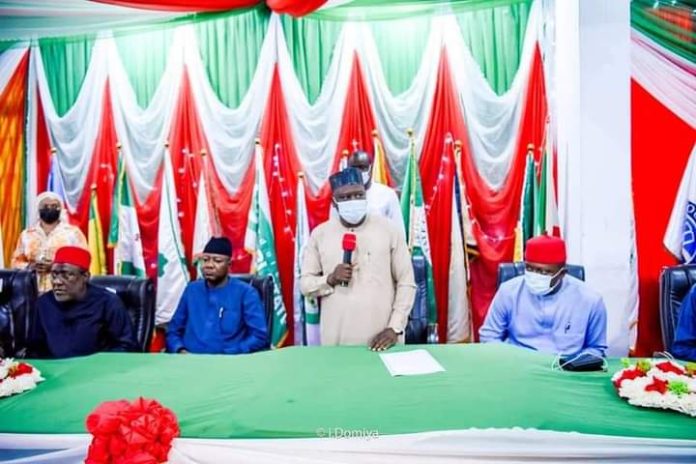 The ‘ and Governor of Adamawa State, the . . says Nigerians have suffered enough and remains the only option for Nigerians in 2023.

was speaking during a world press conference in Abuja on Thursday and the unveiling of the convention logo and promotional materials.

said the nation is at crossroads which will require stepping in to do the needful and cannot afford to let Nigerians down.

The described the enthusiasm shown by the members of the publicity sub committee as a reflection of something bigger, saying it is the desire among Nigerians to have a party like the to deepen Nigeria’s democracy.

While urging party loyalists to make sacrifices for Nigeria at this critical period, restated his commitment to conducting a credible convention that will usher in people of high integrity to lead the party to winning elections in 2023.

He said the key to Nigerias survival remains good governance and was quick to boasts of the “Social reingineering taking place in States which is a testament that the party is making a difference”. He said.

The Deputy Chairman of the Publicity sub committee, who represented the Chairman of Edo State, said he does not doubt the capacity of leading to a fruitful convention.

He regretted that has practically pushed Nigerians to the precipice that her people are fast losing hope in the nation.

notes that despite abundant riches and her ranking as fastest growing economy, Nigeria has turned to poverty capital of the world with 82 million Nigerians living in abject poverty and a 33.3 percent unemployment rate.

was accompanied by the Borno State 2019 Governorship Candidate , a former Federal Lawmaker, a Stalwart and Special Adviser to the on Political Affairs.

Earlier, the Screening Committee had submitted its report to the National Convention Organising Committee.

Receiving the report alongside the Deputy Chairman of Bayelsa and the Secretary of Oyo State at the Legacy House secretariat, Convention Committee Chair, commended the Committee for a job well done.

The Committee had screened and cleared 31 candidates disqualifying 3, while 1 person withdrew from the race.

disclosed that being a democratic party will allow them appeal the decision before the appeals Committee.

The Chairman who noted that the Committee is working on the delegates list, added that not less than 4 thousand are expected to vote during the October 30th and 31st convention in Abuja