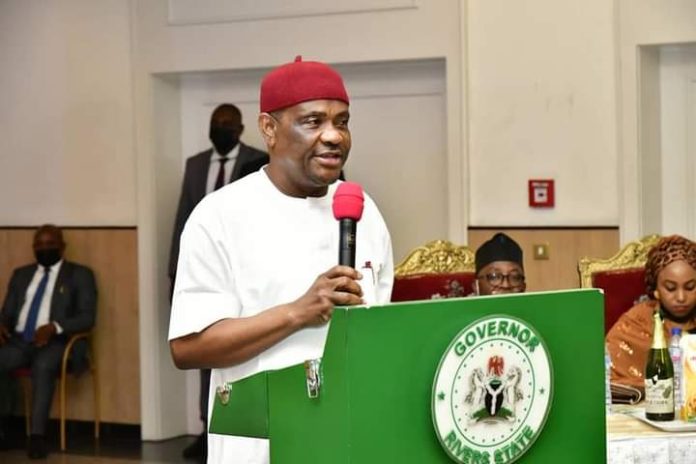 Governor Nyesom Ezenwo Wike says Rivers State government will not enact a bill for financial autonomy of the judiciary.

The governor maintained that it will be futile to bother the State Assembly with such bill since the 1999 constitution as amended already recognises independence of the judiciary.

Governor Wike made this assertion at the dinner in honour of delegates to the 61st annual conference of the Nigerian Bar Association, NBA, held at the banquet hall, Government House, Port Harcourt on Monday night.

The governor noted that since Nigeria does not practice unitary system of government, it would be wrong for the Federal Government to issue directives to States on how they should run their affairs.

“Nobody can force me on how my State will operate. Nobody can say send this bill to the legislature for judiciary autonomy. The constitution has already guaranteed that the judiciary must be independent and we have agreed on that.

“Amendment had been done that the judiciary must be independent, and on first line charge. If I’m not obeying that, there is a sanction for it.”

The governor explained that the State government had released all 2021 capital expenditure due to the judiciary since September. He challenged the Federal Government to prove it has done same.

Governor Wike urged the Federal Government to desist from playing to the gallery with the issue of financial autonomy for the judiciary.

According to him, a Federal Government with decrepit High Court buildings across the country cannot truly claim it fully supports financial autonomy for the judiciary.

“Are they giving the judiciary at the federal level the budget they are supposed to have in order to put the courts in order.”

Governor Wike warned that the Rivers State government will resist any attempt by the Federal Government to deduct funds meant for the State under the guise of implementing financial autonomy for the judiciary.

The governor said the NBA cannot continue to be docile while security agencies are used by the Federal Government to intimidate and harass judges. According to him, “when the judiciary is destroyed, the legal profession is gone.”

Governor Wike, also took a swipe at the past leadership of NBA for not protesting against the closure of courts in Rivers State for almost two years by the Governor Chibuike Amaechi led administration.

The Speaker, Rivers State House of Assembly, Rt. Hon. Ikuinyi Owaji-Ibani, charged the NBA to all time stand in defence of the interest of people of the country.

The President, Nigerian Bar Association, Olumide Akpata, SAN, commended Governor Wike for his unflinching support for the judiciary and the Bar.

Akpata said Governor Wike’s conscientious support and defence of the judiciary is a pointer to his firm belief that institution of State should be strengthened.

The NBA President stated that when Governor Wike leaves office, posterity will remember him as a man who fervently contributed his quota to nation building.